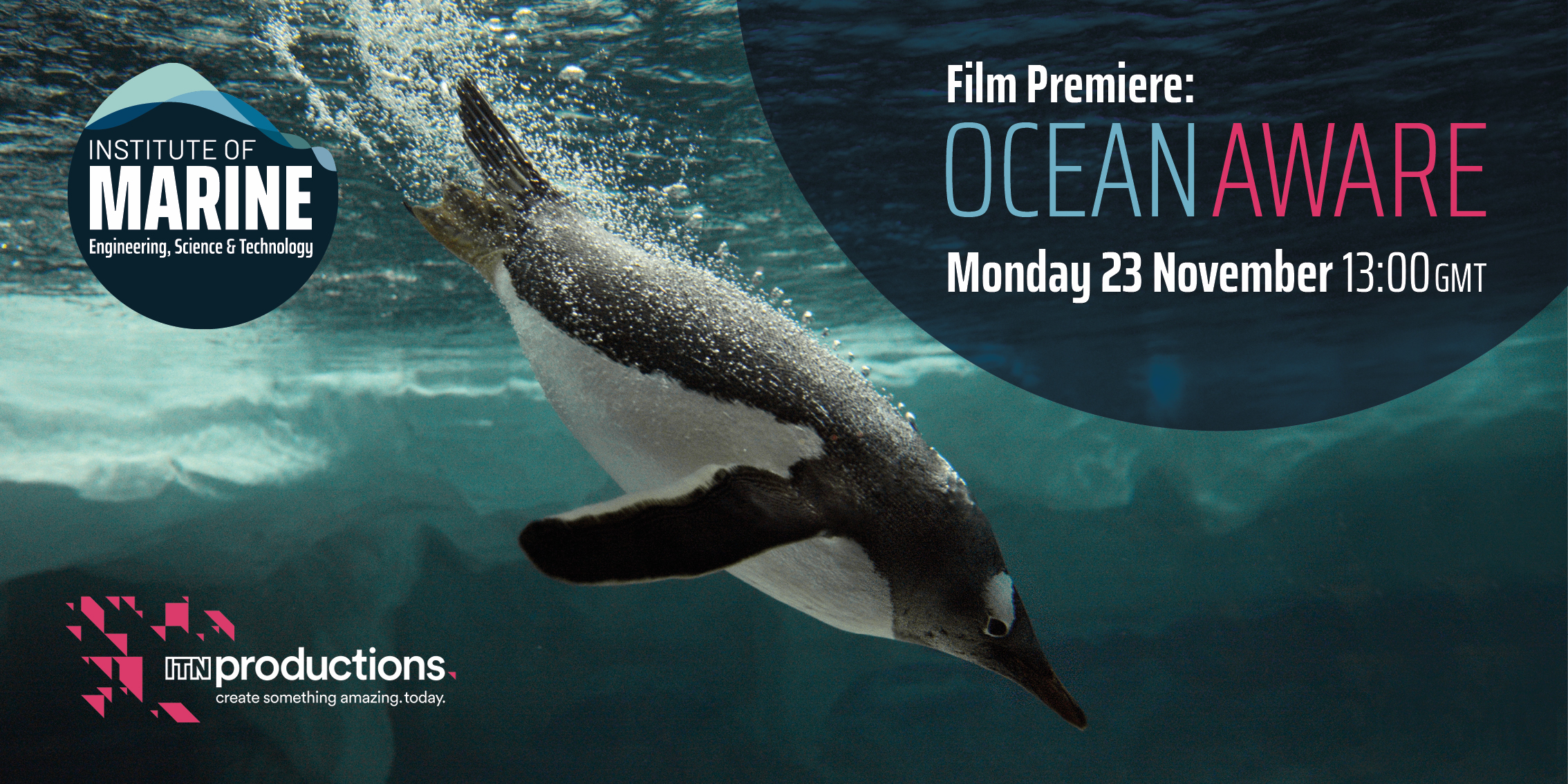 An IMarEST and ITN Productions Film

The Institute of Marine Engineering, Science and Technology (IMarEST) and ITN Productions Industry News have co-produced Ocean Aware, a short film that draws attention to the challenges facing the ocean, describes global mechanisms for defending them, and showcases stories of science, innovation and sustainability that are transforming the marine sector.

The film unravels the web of international governmental organisations tasked with ensuring the safety of shipping, safeguarding the environment and finding ways to equitably share ocean resources, and explains the opportunities open to IMarEST members to influence discussions taking place in these bodies and shape future regulation by contributing their expertise.

The 8-minute film features segments from the International Maritime Organization (IMO), the UN body through which global shipping is regulated, and AXA XL, the global insurance company, which is pushing the boundaries in protecting vulnerable communities from a constantly changing ocean.

To celebrate the film's official premiere, IMarEST is holding an online panel discussion with representatives from the organisations featuring in the film and senior members from the Institute's Special Interest Groups.

The discussion will be followed by an interactive Q&A session giving viewers the opportunity to put their own questions to the panel.

20 years in leading international teams for mission critical engineering applications across a range of industries including Defence, Marine and Aerospace. A track record in disruptive business transformation such as major restructuring, business disposal and acquisition. Acquired skills across a diversity of roles including engineering director, functional leader and programme leader.

Jamie runs Encounter Edu, which he founded in 2008 as Digital Explorer. Jamie's commitment for inspiring young people about the most pressing issues affecting our environment began when he taught teenagers in east London schools between 2004 and 2008. To reach out to thousands of young minds he has innovated the use of technology to bring faraway peoples and environments into classrooms, anchoring broadcasts from some of the most remote locations on the planet.

Lilia has extensive experience in programme/project management in the United Nations system (IMO) and in the shipping industry. She has an advanced university degree (Doctorate) in shipping and environmental law from Aix-Marseille Université. Lilia leads on the global technical cooperation project to support countries in the development and implementation of legal, institutional and policy measures that address marine biodiversity and air emissions.

Jemma is a Senior Advisor in the Science for Sustainable Marine Management Team based at Cefas’ Lowestoft laboratory. She is responsible for providing scientific advice to the Marine Management Organisation (MMO) and the Natural Resources Wales on the potential risks and impacts to the marine environment of a wide range of human activities, including; capital and maintenance dredging and dredged material disposal to sea, marine constructions (including nationally significant infrastructure projects), aggregate extraction and marine renewables.

Jeff has more than 30 years of experience in science-based marine governance, planning, and conservation; he has co-founded two NGOs, served on boards for ocean-related organisations, and managed global programs. Currently, he is an Adviser on Ocean Governance for the Commonwealth Secretariat, London, and leads the Blue Charter program.

Karina is currently working at Mercator Ocean international as oceanographer specialized in ocean climate monitoring. In 2006 she received her Ph.D. in physical oceanography at the Christian Albrechts University in Kiel, Germany, after which she moved in 2007 to France working at several laboratories such as Ifremer, CNRS, and the Mediterranean Institute of Oceanography. In 2015 she moved to Mercator Ocean starting her current position. Her major field of expertise embraces the ocean’s role in climate change, particularly linked to the Earth energy imbalance, ocean warming and sea level rise.