Underwater Vehicles (UV) like drones and gliders are widely used in the industrial and scientific world, as they allow for easy, safe and cheap access to operations. Submarines also are important in navies as they provide unrivalled operational advantages.

Despite being used at depths, UVs are required to travel on the sea surface for some period of time, where they are subject to waves. However, most of the hydrodynamics knowledge applicable to conventional surface ships is not relevant to UVs due to their particular hull forms. Also, hydrodynamics is of critical importance as it defines the ability of a UV to carry out its missions: hence seakeeping, resistance and manoeuvrability forms the subject of this research.

The research is undertaken through Computational Fluid Dynamics (CFD). It allows to model the fluids around an UV hull, and the variation of some parameters as the speed, the wave height or even the hull shape helps to understand the flow dynamics. But CFD also requires ‘real world’ validation, that are carried out through experimental testing at model scale.

Let’s dive into this fascinating world together! 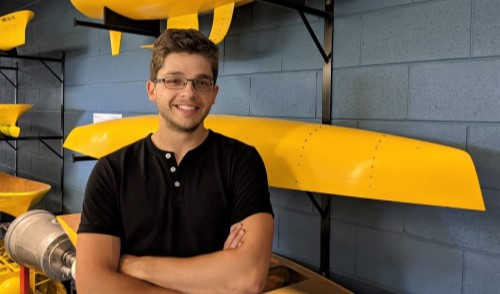 Mathieu Courdier AMIMarEST is a PhD candidate following a strong lineage of leading Underwater Vehicle (UV) hydrodynamics research, carried out at the Australian Maritime College. He holds an MSc in Engineering specialising in Naval Architecture from the ENSTA Bretagne in France; as well as an MBA from the University of Western Brittany. Previously he has worked for Naval Group where he was in charge of creating functional simulators of complex energy-propulsion systems for submarines or innovative ships. Before moving to Australia, he also worked as a Naval Architect for a major energy company, where he spent time aboard ships supporting stability and structural studies in operations.

John Polglaze CMarSci FIMarEST FRINA is an environmental scientist specialising in maritime activities, particularly ships, ports and dockyards. His experience encompasses all aspects of the ship lifecycle from concept development and design, to build, operations, maintenance, support, modernisation/refit and decommissioning through to disposal. He began his career in the Royal Australian Navy, serving in ships and submarines. John is recognised internationally as a specialist in ship environmental compliance and risk analysis, and is regularly invited to advise on these and related matters by a range of ship owners, port operators and maritime regulators, and he has contributed to a number of IMO regulatory instruments.

The IMarEST Stanley Gray Lectures (and the annual Stanley Gray Awards) are named in memory of Stanley Gray who was the Chief Mechanical Engineer at the Port Directorate of Basra during the 1950s & 60s. When he died in 1973 he left half his estate to be held by the Institute in trust to create the Stanley Gray Fund. He expressed the wish that the money should be awarded via a scholarship or prize to wherever the Institute saw distinction in Marine Engineering. This remit has been expanded following due process to include Marine Science and Technology. The Stanley Gray Series of prestige lectures, launched in 2002, is held to mark his generosity to, and patronage of the Institute.