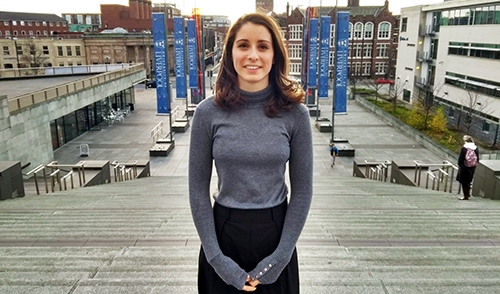 The winner of the David Henderson Inspiring Journey Grant has been announced as Georgina Wisby, a recent graduate with a BSc in Environmental Science and an MSc Sea Level: From Coast to Global Ocean from the University of Liverpool.  For her journey, Georgina will be travelling to the South Pacific and looking to understand the impacts of changing sea level on Pacific Island communities.

The £5,000 grant is awarded to the best idea for an original and exciting journey that not only matters to the candidate, but can also be communicated to the wider public in a way that will inspire them to think differently about the oceans and seas and how we use them.  The story of the journey will be told through a blog, as well as through social media channels and in a final report and presentation.

The interview panel was unanimous in selecting Georgina based on the originality of her journey, her vision and enthusiasm and her ability to tell the story of this journey to our members and the public. Georgina is the first winner of this grant, which was established in memory of David Henderson, who worked for the IMarEST from 2008 until his untimely death in 2016 at the age of 31. It celebrates David’s spirit as an adventurer with a boundless passion for exploring other places. The grant also espouses the preservation of the oceans, something he worked very hard to protect through his role at the Institute.

“I strongly believe in the pioneering research that IMarEST undertakes and I can relate to David Henderson’s passion for continuously creating a positive impact on those around him and his love for exploring. Through this journey, I will continue his values and beliefs and would hugely appreciate the opportunity to do so.” Georgina Wisby, winner of the David Henderson Inspiring Journey Grant.