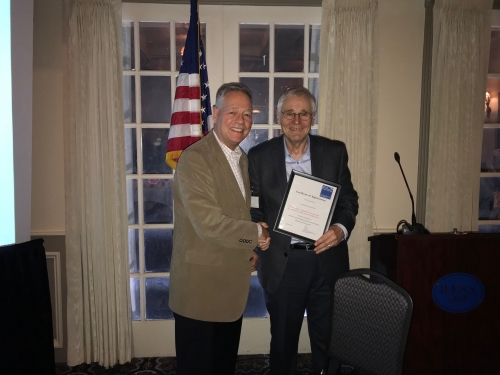 The presentation addressed recent international activities by key organizations which support conclusions that the key cause of climate change is anthropogenic and which advocate for significant efforts to reduce CO2 emissions from fossil fuels.  This includes: the United Nations Framework Convention on Climate Change (UNFCCC) and the COP 21 Paris Agreements; analyses and recommendations by the International Energy Agency; and analyses by the IPIECA (The Global Oil and Gas Industry Association for Environmental and Social Issues).  The speaker discussed climate issues from two personal perspectives.  One is a 50 year view of the arctic basin as an indicator of a changing climate based on service on a Coast Guard icebreaker and as an Exxon engineer studying onshore and offshore arctic developments.  Another perspective, addressing challenges and threats to industry from potential climate policies, is based in part on time served as a staff member for energy and climate issues for a Congresswoman in the U.S. House of Representatives.

Phil Grossweiler served as a U.S. Coast Guard officer on ships operating in North Atlantic and Greenland and Russian Arctic regions.  He worked at Exxon for 25 years with assignments in Exxon’s U.S. and Norwegian production companies and Exxon’s Upstream Research and Upstream Development companies.  Since retiring from Exxon he has worked as a Principal Consultant at M&H Energy Services in Houston consulting to corporate clients on LNG business strategy, LNG projects, and managing risk in offshore oil and gas operations.  He served as Chair, Ultra Deepwater Advisory Committee to the U.S. Secretary of Energy for $200M R&D Programs authorized under the 2005 Energy Policy Act.  He served as an ASME Federal Fellow in the office of Congresswoman Heather Wilson (R-NM) as an advisor for energy, science, natural resources, and climate change issues.  He has presented to forums in the U.S. and China on energy technology and development, and climate change issues.  He has been nominated to serve as a Society of Petroleum Engineers Distinguished Lecturer on the topic “Climate Issues – Perspectives for Stakeholders in the Oil and Gas Industry”.  He graduated from the U.S. Coast Guard Academy and also holds Masters Degrees in Mechanical Engineering and Naval Architecture from Massachusetts Institute of Technology and an MBA Degree from Houston Baptist University.