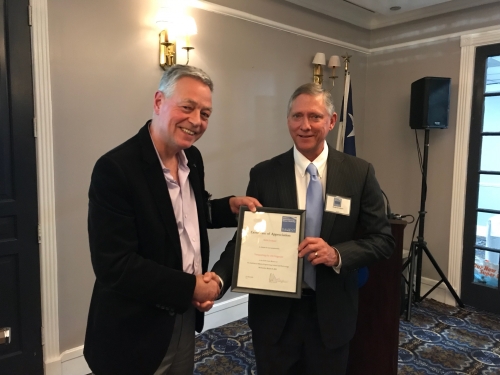 The presentation focussed on the recent transport by Dockwise of two U.S. navy destroyers that were involved in unfortunate accidents off Singapore and Japan, the USS John McCain from Singapore to Japan and the USS Fitzgerald from Japan to Pascagoula, MS via Panama.

Robb Erickson is Senior Vice President for Marine Services in the Houston office of Boskalis Offshore.  He started with Wijsmuller Transport 25 years ago which merged with Dock Express to become Dockwise.  Robb has been instrumental in growing the heavy lift transport business from dependence on offshore drilling rigs to a much more diverse scope of activities including offshore production platforms, TLP’s, Spars, float-over installation of offshore decks, and an emphasis on military cargos.  Prior to working with Dockwise, he started and sold a bottled water company in Houston and brokered the sale of the Shiner Brewery. He has a degree in Business Marketing from the University of Utah.