Wellington Branch was inaugurated in 1969 and comprises Institute Members who are domiciled south from New Plymouth and Napier and includes a few who live in the most northern part of the South Island.

The first tentative informal meeting concerning the setting up of a Branch was held by a group of seven marine engineers who met on 4th February 1969 at noon in the offices of the Maritime Building, Customhouse Quay, in Wellington, following on from ideas put forward during a reception late in the previous year at the Hotel St. George. The next meeting occurred some 10 weeks later, on Monday 14th April, in the Aitken Street offices of the Institute of Marine & Power Engineers, a union of Marine Engineer Officers set up a few years earlier. Office bearers were elected at this meeting.

Following the building of the t.s.m.v. “ARAHANGA” and “ARATIKA” in 1972 and 1974 respectively, to augment the Rail Ferry service from Wellington to Picton and fitting them out with controllable pitch propellers, it was suggested that a Seminar should be held to explain these new marvels to the engineer staff of the Ferries and the rest of the marine fraternity in Australasia. The setting up of this venture in the mid ‘70s proved to be a very heavy workload for the committee, but it brought the maritime businesses of both countries together, for an attendance fee of only $16, on 25th & 26th October 1978 at the Burmah Lodge Motel, and did not thankfully prove to be a loss financially for the Branch.

From the experience gained in organising this first relative ‘low key’ local Seminar, it was decided in the early 1980’s to set up another Symposium on a larger, broader scale, entitled “Improving Efficiency in the New Zealand Marine World”, which attracted delegates from all over the world in October1985, to coincide with the Divisional Council Meeting and put our country on the map in this field. Yet another Symposium was organised by the Branch in 1989, followed five years later by “Martec ‘94”.

The Divisional Council Meeting was first held in Wellington in 1974, then again in 1985, 1994, 2001and we expect to be the host Branch again this year, 2012. With the reduction in shipping over the past two decades, New Zealand, like other Western countries has suffered a reducing maritime involvement and the Branch membership has reduced to the mid 60’s, and is finding great difficulty in attracting marine scientists.

Wellington City is situated at the southern end of the North Island of New Zealand and has been dubbed as “the coolest little capital in the world”. Greater Wellington, which includes the valley of the Hutt river, has a pop-ulation of about 400,000. Although the geography of Cook Strait, situated to the north of a mountain chain in the South Island, gives rise to frequent windy conditions, the temperatures experienced are quite equable during the year, with only a few frosts during the winter and a maximum of about 25°C during the summer. Advantage has been taken of the wind, because a large wind-farm recently erected on the hills to the west of the city is now capable of supplying our whole electrical load for the city!

Wellington’s airport is the busiest in the country, although most of the flights are domestic, the international flights being to and from cities on the eastern seaboard of Australia. Because New Zealand consists of two main islands, there is a considerable amount of both freight and passenger traffic between Wellington and Picton in the South Island. There are a total of five ferries in excess of 10,000 tons each, two of which include rail traffic, running this service, each completing at least two round trips every 24 hours and carrying more than 6 million passengers each year, in addition to their cars and thousands of heavy freight vehicles, providing some eighty miles of “roadway” and “railway”on the sea between the Islands.

There are two Universities in the lower half of the North Island – Victoria University in Wellington and Massey University in Palmerston North, the former involved mainly in geological and marine science, whereas the latter specialises in agricultural sciences. New Zealand is now a major producer of dairy products, having moved from 66 million sheep in past years to half that number now and concentrating more on dairy herds and horticulture. There has also been a remarkable increase in viticulture and huge areas of grazing land have been converted to various grape varieties, which are earning prizes in wine festivals world-wide.

Because the population of the whole country is only about 4.5 millions, the local market is not able to support any major industries, with the result that major machinery and ships have to be purchased from overseas. Vehicles, which were previously assembled locally from “C.K.D.” (cars knocked down) cargo, are now imported fully built-up from the country producing them.

Apart from agricultural and horticultural exports, fishing in the Exclusive Economic Zone, that now comprises the huge area of 570 million hectares, over which New Zealand has oversight and control, should prove to be another huge source of overseas income. Wellington’s large harbour is the crater of a long extinct volcano and the surrounding hills provide very picturesque scenery. 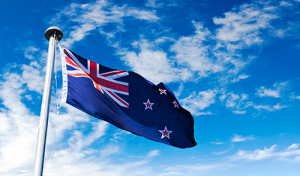 The Wellington Branch has assisted with the IMarEST submission to the New Zealand government’s Ministry of Business, Innovation and Employment…
Published in Wellington Branch
Friday, 25 June 2021 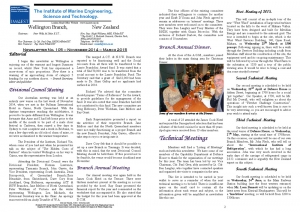