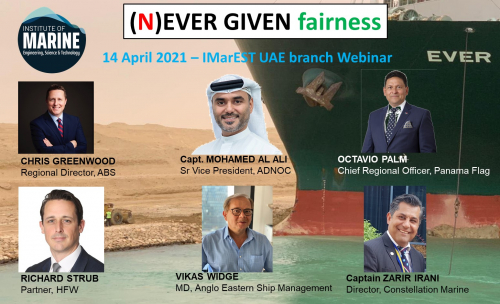 The IMarEST UAE branch hosted a thought-provoking panel discussion on the importance of the seafarer who is a critical stakeholder in the sustainability of shipping. In the interactive webinar, multidimensional views were exchanged amongst 90 shipping professionals on current challenges and possible solutions to unite the maritime industry, to ensure seafarers are not used as scapegoats in the event of a maritime accident. The case of the ABS class, Panama Flag Container Vessel - EVER GIVEN which ran aground on the 23rd of March brought a spotlight on the risks involved in navigating thru restricted waters, the state of mind of those responsible for safe navigation & their liabilities.

NIKEEL IDNANI, Honorary Secretary of the IMarEST UAE branch, as the webinar moderator, raised the curtain with a commitment to supporting the industry bolstered by the Mission of the institute which is - ‘to be the international organization of choice for all concerned with marine resources and activities, by providing professional leadership, upholding standards and developing and sharing knowledge based upon integrity, quality and fairness’. Stressing on fairness, he initiated the proceedings which focused on crew change, communication, benefits of technology and legal protection of seafarers.

The stellar line-up of 6 speakers had the following comments:

CHRISTOPHER GREENWOOD (Regional Director Business Development) who joined ABS in 2008, declared that Class societies pursue efforts in seafarers health and working conditions, fundamentally at a statutory level with the enforcement of the requirements of the ISM & MLC 2006 conventions. Houston headquartered ABS, goes above and beyond minimum requirements in ships design with ‘Digital ergonomics’ i.e. risks associated with technology and digital tools. As technology becomes the ‘hero in our new normal’, we rely on it for our convenience by providing a comfortable working environment e.g. assigning dedicated habitability notations, undertaking studies on the ergonomics of working spaces taking into consideration the placement of equipment so prevent strain injuries/trip hazards. ABS has developed tools to facilitate an increased focus on crew core responsibilities considering increased distracting administrative burden which they must comply viz. inspections, check lists and endless paperwork. By leveraging on digital technology, Mr. Greenwood, a Post-Graduate certificate holder in Artificial Intelligence & Machine Learning from the University of Oxford revealed, “ABS facilitates a class experience that is more automated, less intrusive and risk-based, like a streamlined remote survey where crews can submit photos and documentation rather than sit with us for half a day. This is done by utilizing naturally available data generated from existing systems e.g. a Performance or Condition based system to aid in our class decision making”.

Capt MOHAMED AL ALI (Senior Vice President, Maritime, ADNOC Logistics & Services) acknowledged that the theme of the webinar was close to his heart and commended seafarers as the ‘most important element in the whole supply chain’ forming the lifeblood of the global economy. He provided an insight into ADNOC which recognizes the seafarers’ role and ensures that they are well supported, realizing the sacrifices they have made throughout the pandemic. ADNOC was uniquely positioned being the ship owner, operator and charterer, enabling them take easy decisions to deviate vessels and carry out timely crew changes. They leveraged on communication technology to keep crews abreast with constantly evolving directives in destination ports. ADNOC received complete support from the astute UAE government, which was the first in Asia to permit crew change, creating a hub for ships in the region to provide crew relief. ADNOC recruited 400 seafarers within two months to relieve serving ships staff who had the opportunity to sign off. Capt. Al Ali brought to light the fact that although many countries empathized with the important role of seafarers, regrettably sometimes they are the easy target when incidents occur. He candidly referred to the case of the EVER GIVEN where fingers were immediately being pointed at the seafarers - questioning their due diligence in entering the Suez Canal considering inclement weather, satisfactory maintenance, etc. While it is easy to blame the seafarers, we need to understand that they are the ones who make the company work, being at the frontline. It is therefore necessary to work as a team especially when something goes wrong. ADNOC has understood this and instead of a blame culture, they practice a just and Fair culture where people are accountable, yet they rest assured that they will not be victimized. Capt. Al Ali, the first UAE National Master of an LNG/C, joining the virtual event from Abu Dhabi, highlighted that it was essential to provide suitable technology onboard for efficient ship operation. He appreciated efforts of Flag states for assisting seafarers by extending the validity of their certificates and the support of classification societies with virtual inspections/remote surveys which had never been done before, like the positive approach by oil majors accepting unprecedented virtual SIRE inspections. Working as a team, solutions were sparked by all stakeholders.

OCTAVIO ARTURO RANGEL PALM (Chief Regional Officer, Panama Flag) compared the obligation of Suez Canal Authorities in the EVER GIVEN case with the reputed 100-years operation of the Panama Canal where the pilots assume responsibility. Mr. Palm, a Marine casualty investigator revealed that when an incident occurs, the Human Factor has been identified as an important aspect to be reviewed. Specific points to be observed during the 72-hour period prior to the incident are – duration of last port operations, navigation from previous port of departure to port of arrival, weather during this navigation, reports about repairs or failures, health of the crew or intoxication, if any reported. Panama has implemented the MLC 2006 in all ships flying it’s flag, assuring the Declaration Of Maritime Labour Compliance with the respective Financial security letters and a valid MLC Certificate placed on board. Thanks to the mediation of the Panama flag through the General Directorate of seafarers (DGGM), the payment of USD 2,021,691.29 in wages owed by shipowners to seafarers was achieved, while 539 repatriations were carried out on Panama flagged vessels in various parts of the world in 2020. The Panama Flag is doing their bit through global offices, which issue the Minimum Safe Manning Certificate considering type of ship, GT, Engine Power, Navigation area, type of operation and any other relevant factor e.g. rest hours, which affects the performance of the crew and may affect the safety of navigation and the environment.

RICHARD STRUB (Partner, HFW) introduced HFW as an international law firm with particular focus on the maritime and transportation industries and international trade. He explained that he took the legal position in relation to the criminalization of seafarers and asserted his disclaimer that since HFW is involved in some way in the EVER GIVEN incident, he was unable to speak specifically on that case but was willing to share his perspective on the topic in broad terms. He identified the criminalization of seafarers as being about crew or individual crew members facing detention or criminal charges arising out of an incident onboard, casualty, damage, or pollution and agreed that seafarers are a uniquely vulnerable group. The maritime industry is involved in very different international laws which are not necessarily harmonized e.g. the ports, the flag states, domicile of the seafarer, penal and criminal codes but also then countries treaty obligations and membership of international organizations such as IMO and ILO. And since there isn't harmonization between these laws the seafarers find themselves often, through no fault of their own or through an incident, right in the middle of this maelstrom, often ending up as scapegoats. This was exemplified in the cases of M.T Prestige where the master was imprisoned for 8 months and M.T Hebei Spirit where the Master and Chief Officer were both jailed for criminal negligence and fined but eventually on appeal were acquitted and sent home but that was only after 550 days being deprived of their Liberty. While these famous cases made the news and were ideally suited to be the springboard for discussions, yet similar incidents occur daily in many ports where crew are detained without receiving the protection that they require and deserve. The IMO and ILO have guidelines for the fair treatment of seafarers and when incidents occur, Mr. Strub who ranked in Chambers Global Guide 2021 and is noted as an "excellent lawyer" well versed in handling contentious shipping matters, urged that the responsibility should be taken by the ship owner/manager ensuring legalities in the language the victimized seafarer understands and have access to lawyers who will protect their rights, consular officials, trade unions or even just a witness.

VIKAS WIDGE (Managing Director, Anglo Eastern Ship Management) who tuned into the webinar from Hong Kong, conceded that Seafarers are the lifeline of shipping and we should recognize their invaluable contributions including full support from shore personnel. As a reality check, they and their families have been enduring challenging times during the Covid pandemic, with extended tours of duty and no shore leave. He appreciated those ship owners who deviated from the normal trading route to make crew changes possible, notwithstanding the large costs involved. In Anglo Eastern Ship Management, the cooperative owners have curtailed crew relief delays to less than 3%. In case of incidents, we should carry out impartial investigations to determine the factors which led to the incident rather than resort to blaming the hapless Seafarer. Mr. Widge, a Marine Engineer who joined Anglo Eastern Ship Management in 1987, confessed that mistakes do occur. However, he was convinced that everyone ashore and afloat, goes to work with the intent of doing a good job with no intent of malice. To remain in readiness, ships carry out realistic drills which form part of ‘Saturday routines’ during which they identify areas of improvement to respond to emergencies.

Capt. ZARIR IRANI (Director, Constellation Marine Services) who is passionate about seafarers’ welfare, profoundly explained his rationale for the white paper ‘The Master cannot be the scapegoat, again!’ which was to prevent the criminalization of the EVER GIVEN ship’s staff. He mentioned that Egypt had formally arrested the ship pending a compensation payment of $900 million. As a Claims Consultant, this news corroborated his concerns as he had witnessed forlorn Masters being victimized in cases of alleged pollution and causing an explosion. Capt. Irani was determined to voice his concern in advance of incriminating judgements and to alert the appropriate authorities to be prudent and fair in their investigation. Referring to the EVER GIVEN running aground in the Suez Canal, while steering clear of speculation since the investigation is ongoing, he raised the red flag on the zero-liability principle for the mandatory pilots and the possibility of blaming the Vessel/Master for any loss caused by the vessel while under pilotage a ‘travesty of justice’. Augmenting his support for seafarers, Capt. Irani who is also Regional Director for Antiqua & Barbuda Flag State Administration remarked, “I want the respect and integrity of the profession to be maintained and that was my motive to be ahead of time to anticipate trouble before it actually happens” echoing the sentiments of a larger Maritime community.

The video can be viewed HERE