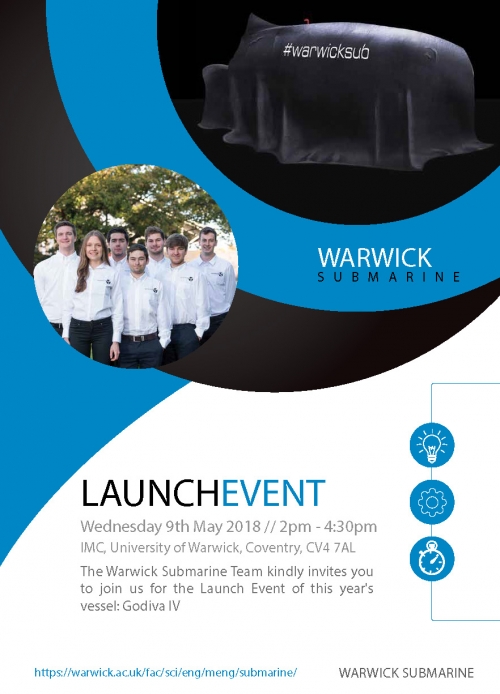 Members of the IMarEST Midlands branch attended the launch event of Warwick Submarine Team's new vessel on 9 May 2018, at the University of Warwick's WMG.

The team unveiled its latest vessel, Godiva IV, built specifically to compete at the fourth biennial European International Submarine Race (eISR), which takes place from the 4 - 13 July 2018 in Gosport, England, and is organised by the IMarEST and hosted by QinetiQ.

After a presentation by the team, guests were given a tour of the WMG's International Manufacturing Centre, where the submarine has been designed and manufactured, and had opportunity to view the vessel up close to learn more about its many design innovations.

The Midlands Branch wishes the Warwick Submarine Team well, as they complete their final preparations ahead of the start of eISR 2018.

View the embedded image gallery online at:
https://www.imarest.org/local-communities/uk/midlands/item/4235-branch-attends-the-launch-of-warwick-submarine-team-s-new-vessel-ahead-of-eisr-2018#sigProId092ec86d5b
back to top