A programme of seven lectures, held at Liverpool John Moores University, commences in October and continues until May. Lectures are held on the first Monday of the month unless otherwise stated and some are held jointly with the Nautical Institute. Notices of the Lectures are circulated around to colleges and supportive businesses.

In October we have our Annual Dinner/Dance in aid of the Guild of Benevolence held at the Liverpool Yacht Club also at the same venue in April, an informal dinner is held for Members their partners and friends. Presentation of awards and long service certificates may take place at these dinners.

Various Technical visits are also organised throughout the year.

About the North West region

England’s North West region covers an area bounded in the South by the Wirral peninsular and Cheshire plain, to the East are the Pennines – the backbone of England. The Scottish border lies to the North and Irish Sea in the West completes the circuit. In the North of the region lies England’s largest National Park, the Lake District, with ‘Scafell’ its highest peak and Windermere the longest lake in England; further South are areas of natural beauty namely The Forest of Bowland and Morecambe Bay. Martin Mere is a wonderful place to visit for wild bird life and to witness bird migration in the appropriate season. So there is plenty for walkers and countryside enthusiasts to enjoy. In South West Lakeland lies Barrow, where Royal Naval vessels have and are still being built.

To the south of the region are the cities of Liverpool and Manchester; both great industrial centres not only of the past but also in the present day where modern technology plays a part. Shipping is still a vital part of Liverpool’s trade and is supported by the presence of international marine consultants and surveyor companies. The Seaforth container docks now cater for vessels that previously used the docks built along the river Mersey. Repair and dry-dock facilities are provided by a reformed Cammel Laird ship repair yard.

However, it’s not all nautical! General Motors and Jaguar have plants in the region at Ellesmere Port and Halewood. Runcorn situated on the southern side of the Mersey and Manchester Ship Canal was probably home to England’s chemical industry. When we think of glass the name Pilkinton comes to mind, based in St Helens, Pilkington’s was the first company to perfect the manufacture of Float glass. 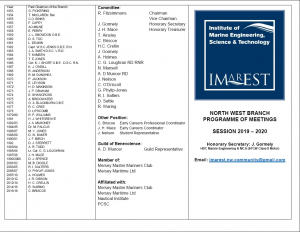 The 2019/20 programme of technical talks and other events for the North West Branch has been issued and can be…
Published in North West England & North Wales Branch
Wednesday, 02 October 2019
Download attachments: 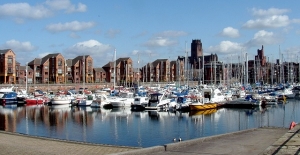 It’s February, the Branch has just had its Annual General Meeting and with that has come a new Chairman, Clive…
Published in North West England & North Wales Branch
Friday, 05 February 2016
Download attachments:

The roles will be based in the Maritime & Engineering College North West for the first phase and will then…
Published in North West England & North Wales Branch
Thursday, 17 December 2015
Page 1 of 2