The IMarEST Scottish Branch is traditionally the largest branch in the Institute. It has a very active membership with members from all areas of marine activity including naval and merchant shipbuilding, ship management, offshore oil, energy production including renewables, naval base personnel both naval and civilian, main and auxiliary machinery manufacturing, ship repair, classification and surveying, universities and colleges and marine biology and environmental issues.

The branch organises a winter programme of technical lectures by leading speakers on a variety of topical subjects of local and national interest. Regular technical outings are organised to engineering facilities of current or historic interest. Social events are arranged including one of the best attended branch Annual Dinners, a Dinner Dance and Spring and Autumn golf outings. The branch also sponsors competitions at Universities, Colleges and Schools aimed at promoting the marine industry as a career.

We have an active Young Members Network who keep close contact with the seats of learning to promote the IMarEST. The branch also has assessors qualified to conduct Professional Review Interviews for membership of the Institute or registration with the Engineering Council.

With the exception of a small area around the Aberdeen area majoring on the oil industry the Scottish Branch encompasses all of Scotland including the Highlands and Islands. It covers the largest land mass of any branch in the United Kingdom measuring some 300 miles from North to South on the mainland or 450miles including the Islands. Scotland was the traditional home of heavy engineering and shipbuilding in the United Kingdom having built the 3 largest passenger liners in the UK and several of the largest naval vessels for the UK navy. Heavy engineering has now largely gone but the largest surface vessels for the UK Navy are still built in Scottish yards and there are a myriad of companies manufacturing equipment for shipbuilding, the offshore industry and energy production and exploration. Although ship owning is in decline Scottish companies now manage a vast number of ships operating world wide in all trades. Scottish Universities are still held in high esteem and carry out valuable investigative and research work for all branches of the marine industry. 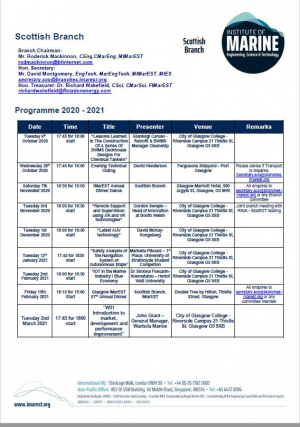 Hello and welcome to the Scottish branch April 2019 newsletter, hopefully the first of many to help provided information and…
Published in Scottish Branch
Monday, 29 April 2019
Download attachments: 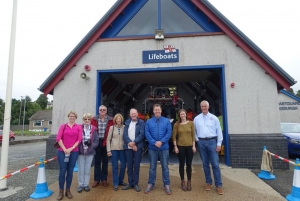 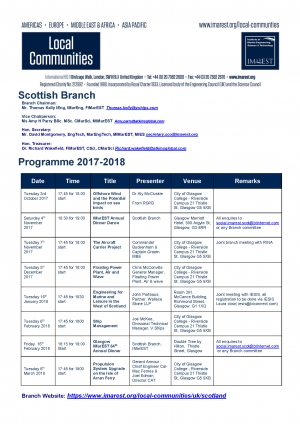