The Southern Joint Branch is comprised of members of both the Institute of Marine Engineering, Science & Technology and the Royal Institution of Naval Architects and runs a diverse programme of talks on a wide variety of topics both from members and guest speakers.

The present membership of our Branch stretches from Lyme Regis and Beaminster in Dorset to Polegate East Sussex, and includes East Grinstead, Seaford by Sea, Crawley in West Sussex, North to Salisbury in Wiltshire and the whole of Hampshire and the Isle of Wight.

Lectures are generally held in Southampton but are also held in Gosport and Portsmouth. The branch has a Young Members Network who are establishing their own programme of visits, workshops and lectures. All branch events are “open to all”, and the branch aims to inform and assist at all stages of career development. Technical visits are organised to suitable venues which will be of interest to all and are usually well supported.

There are strong branch links with the Universities of Southampton & Portsmouth, the National Oceanographic Centre, Solent University, Warsash Maritime Academy, and HMS Sultan the Royal Navy Engineering College. On the Social Side we hold a Spring Supper which is informal with entertainment and in November an Annual Dinner with Guest Speaker where we present 45 year membership certificates and prizes to top students.

The Branch formed in 1947, is unique as from its inception we have had both a President and a Chairman. The President has 2 years in office and the Chairman is then invited to replace him. A new Chairman being elected from members of the Council which itself is elected at each AGM which is held in February of each year.

Southampton is one of the UK’s major container ports, and has the UK’s largest oil refinery at Fawley.

For the cruise industry it is the major UK port visited by ships of numerous companies and is home to Carnival Cruise’s, Cunard & P&O Fleets. We have the main headquarters of the Maritime and Coastguard Agency which is the UK flag administration and also of one of the world’s leading classification societies.

The UK’s growing yacht and pleasure craft industry is centred in the area from the River Hamble, along to Poole and across to the Isle of Wight. One of the worlds largest hovercraft manufacturers is based in Southampton and the area is also home to the Jubilee Sailing Trust and the Tall Ships Sailing Trust.

The home of the Royal Navy is Portsmouth Naval Base and its ancillary establishments together with BAE shipbuilding facility, Portsmouth Ferry Terminal and QinetiQ Research are all within our district as is the Marchwood Military Port. 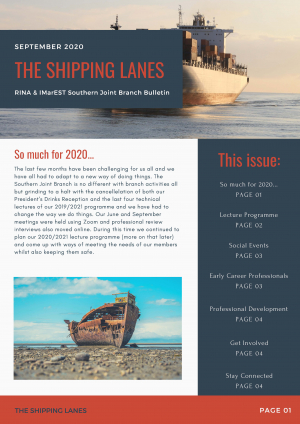 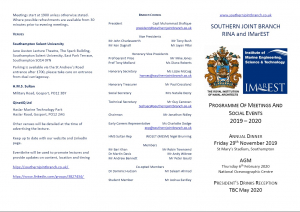 The October 2019 letter from the Branch's Technical Secretary to Branch Members about the 2019-2020 technical events programme can be…
Published in Southern Joint Branch
Wednesday, 09 October 2019
Download attachments:

View All Events
There are no up-coming events