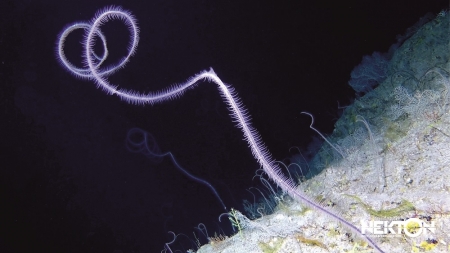 Results from Nekton Mission I, the XL Catlin Deep Ocean Survey, launched today in Bermuda ahead of the Ocean Risk Summit confirms the discovery of a new zone in the ocean, the Rariphotic Zone (Rare Light Zone) from 130metres to 300metres.

The Rariphotic Zone is the fourth zone confirmed in the top 3000m of the ocean, each defined by distinct biological communities living at different depths. The zones are the Altiphotic (0metres to 40metres), Mesophotic (40metres to 130metres), Rariphotic (130metres to 300metres) and Bathyal Zone (300metres to 3000metres).

Alex Rogers, Scientific Director of the Nekton Oxford Deep Ocean Research Institute (‘Nekton’) and Professor of Conservation Biology at the University of Oxford led the research and believes these discoveries could challenge our assumptions of the patterns of biodiversity of life, including the number of different species, in the ocean.

“If life in the shallower regions of the deep sea is so poorly documented it undermines confidence in our existing understanding of how the patterns of life change with depth,” says Professor Rogers.

Nekton Mission 1 - the XL Catlin Deep Ocean Survey - is a major scientific marine research expedition to investigate ocean function, health, and resilience across the Northwest Atlantic and focused on Bermuda. Laboratory analysis conducted by a network of scientists from across 15 different marine research institutes has revealed the discovery of over an estimated 100 new species including very small animals such as tanaids to dozens of new algae species and larger charismatic animals such as black wire coral that stand up to two metres high.

“We believe we have discovered dozens of new species of algae including the deepest ever record to have had its DNA sequenced. Many are recognised for demonstrating a new biogeographical link between Bermuda and the Indo-Pacific”, says Professor Craig Schneider, Trinity College, USA, one of the participating scientists.

“We have discovered at least 13 new crustacean species including tanaids, gnathiid isopods and leptostracans”, explains Professor Nick Schizas, University of Puerto Rico at Mayaguez, who also participated in the Mission.

“Considering the Bermudian waters have been comparatively well studied for many decades, we certainly weren’t expecting such a large number and diversity of new species”, explains Professor Rogers. “These discoveries are evidence of how little we know and how important it is to document this unknown frontier to ensure that its future is protected”.

In March 2018, in the scientific journal Nature Scientific Reports, Dr. Carole Baldwin from the Smithsonian Institute described the discovery of unique reef-fish communities living above the seabed between 130 and 309 meters around the Caribbean island of Curacao that are taxonomically distinct from shallower animals. Lacking an existing name for this depth zone Dr. Baldwin proposed ‘rariphotic’.

Results from the XL Catlin Deep Ocean Survey in Bermuda confirms that a similar zonation of life exists in the water column, and provides additional evidence of this zonation within the biota of the seabed including corals, sponges and algae.

During field research, the discovery of a major subsea algal forest on the summit of the previously under explored Plantagenet Seamount (locally known as Argus) provided the first indications of a potentially major scientific breakthrough. Just 15 miles off the coast of Bermuda, the slopes of the Seamount were found to have gardens of twisted wire corals and sea fans, communities of sea urchins, green moray eels, yellow hermit crabs, fish and other mobile fauna feeding off zooplankton and algae drifting off the summit and settling on the deep seabed. There are more than 100,000 seamounts globally but less than 50 have been biologically sampled in detail.

The Mission’s transect data from the Kelvin Seamount on habitat and species presence has already been used by North West Atlantic Fisheries Organisation to increase protection of the area. The Mission also saw the launch of the United Nations Educational, Scientific and Culture Organisation’s (UNESCO) World Heritage in the High Seas Programme. The Mission has been credited as the spark for Sky PLC’s Ocean Rescue Campaign.

The first scientific publication from the Mission documented the deepest recorded evidence of lionfish globally to reveal the spread of this invasive species deeper into the ocean than previously known.