The Water Project: students find solutions to the lack of clean water across the world 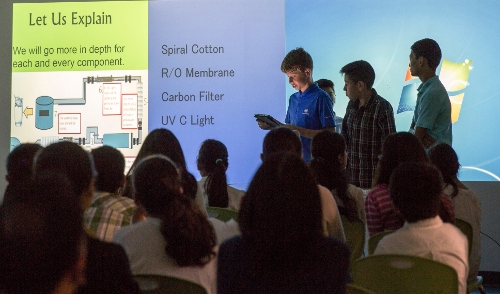 Students took on the problem of finding a solution for the lives of half of the world’s population living in water-deprived regions where lack of access to a sustainable source of clean water is the root cause to many diseases and serious illnesses. They worked as teams to produce solutions to create a sustainable source of fresh drinking water for those living in water-deprived areas.

Alan Mills, chair of the IMarEST Gulf Coast branch, discusses using the Water Project as a means to inspire school children to become scientists and engineers.

1. What is the basis for the Water Project?

I was doing a lot of business travel in early 2014 and I always seemed to end up discussing water, its scarcity and the limited efforts to really tackle the problem. I read newspapers in the UK, listened to radio/podcasts when travelling or noticed magazine articles. I knew I was being bombarded with this message and wanted to figure out what to do about it.

It’s worth remembering that although over 70% of the world’s surface is covered with water, less than 3% is fresh water. Of that, only one-third is accessible to the human population and almost 50% of the world’s population live in the water-deprived areas – which could rise to 65% by 2035.

It seemed to me that if the engineers and scientists of today do not achieve the necessary breakthroughs, then the task will fall to future professionals. And where are these individuals?

This made me think that we, as Gulf Coast Branch (GCB) in Houston, could find ways to develop a sustainable source of drinking water for the world’s population and apply a local focus by engaging with today’s youngsters. At a GCB committee meeting in summer 2014 I put forward the idea of running a competition in local schools in Houston and its satellite city, Katy.

2. How hard was it to get local educational institutions involved?

We approached the superintendents of the independent school districts (ISDs) in Houston and Katy. It’s always a good idea to understand the importance of timing: sending a letter to the two ISD superintendents in July by snail mail, when schools are already out for summer and the start to the next academic year is already planned, is a lesson learned the hard way! It took us until January 2015 to register the necessary attention of the focus ISDs, but when it did; wow!

The GCB committee has been fantastic. Not only have we had meetings with Houston and Katy ISDs, but we developed a brilliant flyer to appeal to the youngsters, recruited a panel of judges, and were even gifted a rubric for the judges.

Since launching the flyer for middle and high schools we have also had elementary schools wishing to take part, and so decided to run a separate competition in parallel. There are prizes for the overall top three teams from middle and high schools and the top three teams from elementary schools. Right now, between Houston and Katy we have over 20 schools signed up to take part.

3. How does the project relate to IMarEST members?

Although the IMarEST has a broad world-view, the Water Project goes one step further as it is about an issue that affects the whole of humanity. I expect that the solutions the students develop will naturally involve the Blue Economy that many IMarEST members are actively engaged with, to a significant degree.

4. What does the project aim to achieve?

Our real goal is to provide an arena for that creative spark of genius that may precipitate a solution to the world’s water problem. But failing that, if the Water Project inspires just one person to become an engineer or scientist, then our efforts will be worthwhile.

The rubric and criteria the judges will follow is to identify that spark of genius, rather than look for the most feasible solution. As the judging criteria are highly subjective, we have invited five judges that are all eminent professionals with a career in some way influenced by water:

· Jim Speer, a senior lawyer from the water-starved town of El Paso, Texas

· A water resources specialist at the Baker Institute, Rice University, Houston, will be confirmed in the near future

We also feel that the requirement for team-based entry to the project recognises that feasible solutions to many of life’s problems are brought into effect by people with a wide variety of skill-sets and not individuals.

View the embedded image gallery online at:
https://www.imarest.org/policy-news/institute-news/item/2256-the-water-project#sigProIdbd041046fc
back to top