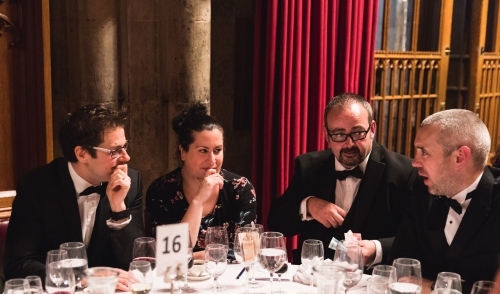 Guests gathered for the IMarEST 114th Annual Dinner at Guildhall, City of London to celebrate another year for the Institute.

Prof. Chris Hodge OBE FREng FIMarEST, 115th President of IMarEST, gave a warm welcome, speaking of the Institute’s transformation over recent years: “We are now, as an Institute, much more fit for our future challenges than we have been for a very long time. We are now delivering more services to more members than ever - and at less cost, with less staff. I applaud the efforts of the entire executive team.”

The President also went on to remember David Henderson, the Institute’s registrar, who died in December at the untimely age of 31. The Institute launched a new award in memory of David and his adventurous spirit, called the IMarEST Inspiring Journey Grant. Each year, the Institute will support the best idea for an original, exciting journey which really matters to the recipient and that will lead them to tell a story that will inspire people to think about the oceans and seas and about how they are used.

The new President conferred an Honorary Fellowship, the highest accolade the Institute can award, posthumously to David Henderson, which was received by his father, John Henderson and brother, Paul Henderson.

An Honorary Fellowship was also awarded to the Institute’s Honorary Treasurer, Frank Mungo (who served as President in 2003) in recognition for his outstanding contribution to, and guidance of, the Institute, leading it to its greatly improved position.

An Honorary Vice-Presidency was awarded to John McGrath for his long and deeply involved service to the Institute through his engagement with the Professional Affairs and Education Committee and the Membership Committee.

Winners of the Denny Medal, awarded to the best paper published over the course of one year in each of the Journal of Marine Engineering and Technology (JMET) and the Journal of Operational Oceanography (JOO) were announced for both 2015 and 2016.

“This is the first year that we have had the pleasure of presenting these awards at the Annual Dinner; I am delighted that we are able to showcase the brilliant work that is being done and recognise those individuals that are driving the industry forward.” David Loosley, Chief Executive, IMarEST.

‘This year’s IMarEST Annual Dinner was a hugely enjoyable event and gave us the opportunity to meet people from across the industry, including engineers, seafarers and scientists. It was particularly nice to see the Institute make awards to members both for life-long achievement and to some of the younger engineers and scientists who may well lead our industry in the future’ Tom Boardley, Executive Vice President, Lloyd's Register (Gold Sponsor).

View the embedded image gallery online at:
https://www.imarest.org/policy-news/institute-news/item/3195-imarest-hosts-114th-annual-dinner-with-much-success#sigProId473f059088
back to top