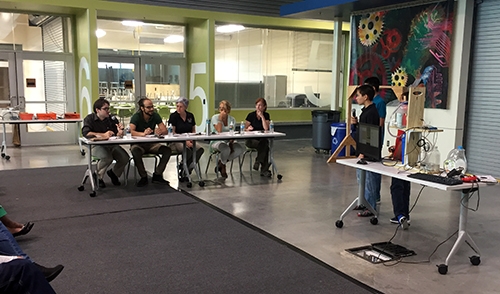 Following the great success of the Water Project in 2016, IMarEST’s Houston Branch was keen to build upon the relationship created with Katy Independent School District.  Following the competition, each teacher that had mentored a team to take part was given a Raspberry Pi 3 as a prize.  The Houston Branch offered this in the hope that students could become involved with science and technology projects in the future.

This year, the branch coordinated a competition encouraging students to work in teams to design a use for the Raspberry Pi 3 (RP3) devices that was “water-related”, in an environmental sense.

Students formed teams and met after school, twice a month at the STEAM Center, to consider ways to constructively deploy the RP3 devices.  Working on their own initiative, they selected an idea, planned the project, specifying and procuring the parts and components needed to produce a prototype and then build a working model.

Each team was given an RP3 device and $100 to spend on parts and components to produce their design, with the costs reimbursed by the IMarEST’s Houston Branch. Students were invited to present their projects to a panel of judges on 17 June, viewed by an audience of family, friends and the Houston Branch committee members.

Eight teams had started the competition and such are the challenges of this type of competition, the number had reduced to five by the final. For the students to produce a working prototype they had to:

Finalists were five teams, all 6th graders (11/12) and all from Beckendorff Junior High in Katy.  This included one brave team that did not have a working prototype, but wanted to tell the judges and audience what they set out to achieve and had learned from the experience.

The teams were given ten minutes to present their project to the judges and demonstrate how it works.  Judges would then ask the students some questions about the choices made, the challenges overcome and their overall experience. After careful consideration, the grading was:

The winners, Neptune’s Trident, focused on a water filtration method that would help keep drinking water safe for human consumption.  Their thinking was clearly driven by the Flint (Michigan) water scandal where local authorities had allowed toxic levels of lead pollution to enter the water supply and endanger the lives of the local population.  The story has gripped the US.

Tech Ninjas, an all-girl team, went the extra mile by carefully considering the economics of their solution, a water economizer which detected the temperature and dryness of soil to determine when garden sprinklers should come on.  They had even consulted with a local business owner regarding the commercial viability of a scaled version of their project.

Each student received a Certificate of Participation, with 3rd, 2nd and 1st receiving Bronze, Silver and Gold medals.  In addition, each team member from Neptune’s Trident received a $25 voucher to visit Houston Museum of Natural Science.