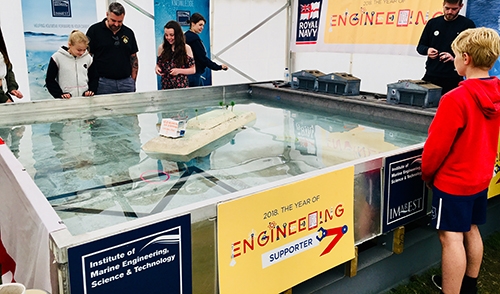 Thousands of people enjoyed a weekend of fun at the HMS Sultan Summer Show put on by the Royal Navy in Gosport, UK on 16-17 June. The IMarEST was supporting in the STEM tent, which was a new feature this year, supporting the UK government’s campaign to make 2018 the Year of Engineering. The year aims to showcase the exciting, rewarding and creative opportunities that a career in engineering offers in response to the severe shortage of young people who think it could be a career for them.

The IMarEST’s activity featured a large water tank in which children could race remote controlled ships and submarines around an obstacle course. The Institute was also joined by the Southampton University Human-Powered Submarine team who gave talks about the processes behind designing, building and actually racing their submarine! The team also helped children to model their own boats out of plasticine and see how they fared in the water.

Don’t miss out on similar activities which will be going on at the eISR Open Day in Portsmouth, UK on 7 July – come and visit us!