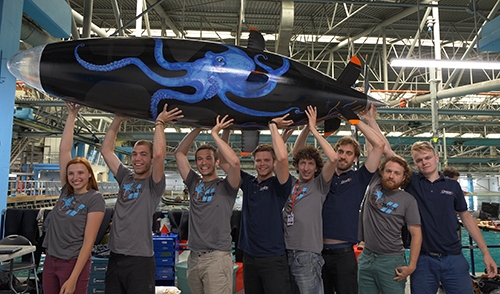 The IMarEST’s European International Submarine Races 2018, held 3 -13 July at QinetiQ’s Ocean Basin in Gosport, UK, have concluded with the Canadian École de Technologie Supérieure team taking the winning trophy with their submarine, Omer 11 and breaking the world speed record. The runners-up came from universities in the Netherlands and the USA.

The overall winner of the eISR must combine excellence in engineering design, manufacture, performance, reliability and reporting and, in submarine racing, the name Omer is synonymous with all of these. The students from Montreal brought innovation to a new level this year, combining several iterations of racing success into a single world record-breaking submersible speedster.

Omer 11 is the first human-powered submarine to be equipped with interchangeable propeller and non-propeller propulsion systems. The team started the week with a standard two-bladed propeller, then moved to an even more efficient single-bladed prop to clinch the top speed of the competition by a male pilot. Finally they swapped in their biomimetic propulsion system, which was inspired by the wings of a penguin or sea-turtle, and with a speed of 4.94 kts, beat the world speed record, which had stood since 2009, in the "non-propeller" division.

“Of the eighteen teams that applied to compete, twelve made it through the qualifying round over the winter to secure a place on the starting line in the UK last week. Underwater innovation showed up in force as the teams of students from universities in Canada, the US, Poland, Germany and the Netherlands gathered to try their hand at the gruelling engineering and sporting competition that is the European International Submarine Races. Modern met traditional as carbon-fibre and 3D-printed hulls took on wood planking and hand-laid fibreglass; novel biomimetic propulsors challenged high-efficiency propellers; and automated mechatronic control rivalled the traditional joystick. A lot of learning happened in among the fun the teams were having, both on and off the course. And of course there is nothing quite like a competition that ends in a new world speed record!” William Megill, Race Director, IMarEST.

Team Wasub from the Technical University of Delft was the first runner-up and is another of the world's most professional student engineering teams. Their dedication to detail and to planning their approach to the competition is a pleasure to see. Their submarine, Wasub 8, was again a speedy machine, testament to the long hours, days, weeks and months the team put into its design, build and testing. They got unlucky with a crash which damaged the underside of the vessel and forced them into some significant repairs, which they completed quickly and completely so that their female pilot could come out on top of her division. Wasub 8 easily won the separate BAE Systems Agility and Endurance race on the last day of the competition, demonstrating the skill of all three of their pilots.

“What better way to invest in the next generation of marine engineers and scientists than to give them an opportunity to show their stuff on the international stage. Student engineering competitions like this one foster engagement in the ocean engineering and science disciplines as a way to address the developing shortfall in maritime engineering and sciences. It’s a particularly effective way to attract students into these career fields.” Mike Whalley, President, Babcock Canada (Babcock were supporters of the races as well as of the winning Canadian École de Technologie Supérieure team and the University of Victoria team).

Florida Atlantic University returned after a six-year absence from the races and won second runner-up. Designed specifically for the slalom section of the eISR course, their submarine HPS Atlantic was easily the most maneuverable vessel in the field. Its directional thrust system, in which a flexible joint in the propeller shaft allowed the propeller to be pointed off-axis, removed the need for a drag-inducing rudder and allowed their experienced pilot to rip through the tight turns of the challenging slalom course and on to victory on the last day of the main competition. It also landed them the coveted BMT Award for Innovation.

Jon Bayliss, Head of Platform Design and Life Support at QinetiQ commented: “We are delighted to host, for the fourth time, the human-powered submarine race. The development of engineering talent in the marine sector is something QinetiQ support through a variety of events.  The human-powered submarine races are a real test of ingenuity and team skills that enables young engineers to develop novel ideas in a very unique working environment.  The multi-national interest in this event is very encouraging as this also enables good networking opportunities throughout this specialist field within the worldwide maritime engineering community.”

John Stott, Senior Engineering Manager at BAE Systems, a Gold sponsor of the races, added: “BAE Systems has been designing and building submarines for the UK since the 1960's and are proactively engaged in delivering sustainable marine engineering careers and congratulate IMarEST on their success in this superb STEM student event.  The international teams assembled at eISR 2018 have demonstrated considerable skill and perseverance in designing, building and successfully facing the logistic challenges of transporting their human-powered submarines around the globe to race in the UK.  The performance of the submarines in the water over the week of races has been a credit to their ingenuity, enthusiasm and sense of team work. Their collaborative and inclusive approach is truly inspirational and personifies the attributes we seek within BAE Systems.  We wish them all well in their future careers.”

Liz Whitrow of BMT Canada, a sponsor of the event, said that the organisation “recognizes that entering the European International Submarine Races (eISR) requires real dedication and commitment.  Teams need to encompass all the elements of a design and build project, members are required to learn new skills both on the engineering side but also associated with project management, marketing and fundraising.  All these aspects attract and create some of the brightest, most enthusiastic students, these are the types of people BMT wants to recruit, and these students are our future. There are limited opportunities for young people to participate in projects where they are able to see project right through the lifecycle of design, build and operate, the eISR gives them this opportunity.”

“Having supported and been involved in the eISR event since its inauguration in 2012, BMT has seen how the teams have raised the bar each year.  The quality of the designs and the innovation the teams introduce to their designs is outstanding and keeps going up.  It is very inspiring to see 12 teams from 5 countries working together and helping each other to ensure everyone is able to get in the water.  We saw equipment, submarine spare parts and even support divers being lent, everyone one just pitches in.  The comradery between the teams is amazing and uplifting.  BMT can’t wait to see what they can come up with for the 2020 event.”