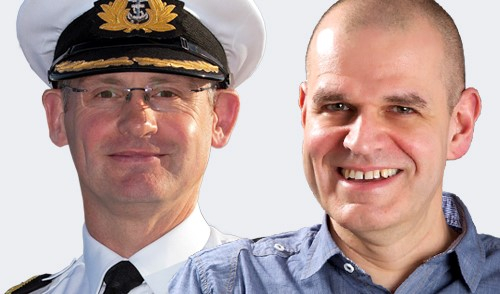 Two influential Institute of Marine Engineering, Science and Technology (IMarEST) events -Engine As A Weapon International Symposium (EAAW VIII) and the Marine Electrical and Control Systems Safety Conference (MECSS 2019) - are being held for the first time alongside each other at the America Square Conference Centre in London on Tuesday 2 and Wednesday 3 July 2019. Registration is now open at www.eaaw.org.uk and www.mecss.org.uk

“A fascinating two days awaits delegates from around the globe,” explains EAAW VIII’s Chairman Cdr Ian Hassall RN, T45 Deputy Team Leader and T45 Platform Chief Engineer, Ministry of Defence, UK. “Although each programme has its own distinct theme, ‘Evolving intelligent platforms for the future battlespace’ for EAAW VIII and ‘Inspiring safer systems at sea’ for MECSS 2019, the synergies can be seen from the excellent cross section of papers and in the session themes – Autonomy; Cyber Security; Energy; Green Ship Agenda; Artificial Intelligence; Modelling; Twinning/modelling; and Power Systems Integration.

“After a joint first day including keynote addresses by Cdr Stephen P Markle USN (Ret), Program Manager and Director of the Electric Ships Office, US Navy Program Executive Office Ships as the EAAW VIII keynote speaker and Professor Chris Hodge, Chief Electrical Engineer, Defence & Security, BMT taking on that role for MECSS 2019, the second day splits into two separate parallel streams. Before that happens, the programme covers Autonomy and Cyber Security, with a foray into Artificial Intelligence during the panel debate, a step that will help form opinion amongst the defence, naval and maritime sectors.”

As MECSS 2019 Chairman, Kevin Daffey, Rolls-Royce and IMarEST President-Elect explains: “The subject matters are closely linked, one feeding off the other and vice versa, with papers looking at the same issues but through a different lens. EAAW VIII has a clear ‘Capability’ focus whereas MECSS 2019 looks more at the safety issues and practicalities of these technologies.

“Attendance at this seminal event in the IMarEST calendar will, amongst other things, enable delegates to gain a greater appreciation of the most recent developments and thoughts on the most appropriate forms of energy storage mediums in power systems, both from an environmental and safety perspective, the integration and modelling of these systems, tempered by the practicalities and threats of adopting these technologies. Delegates can move freely between the parallel technical sessions on the second day.”

The closing summary for EAAW VIII will be given by Captain Matt Bolton RN, who has been involved in the EAAW Symposia since its inception and established the core principles of the series, and Kevin Daffey, MECSS 2019 Chairman, who has been the driving force behind the MECSS conference series since it started with the Marine Arc Flash conference in 2011.

The two-day event, organised by FIGS Events on behalf of the IMarEST, will allow participants time for networking between delegates, keynote speakers, presenters, panel members and other attendees. The reception at Trinity House at the end of day one will add to these opportunities.

The joint event is supported by the Society for Underwater Technology (SUT); Institution of Mechanical Engineers (IMechE); and the Royal Netherlands Society of Engineers (KIVI).  EAAW VIII has Babcock International Group as its major sponsor and is also supported by UK Naval Engineering Science and Technology (UKNEST).