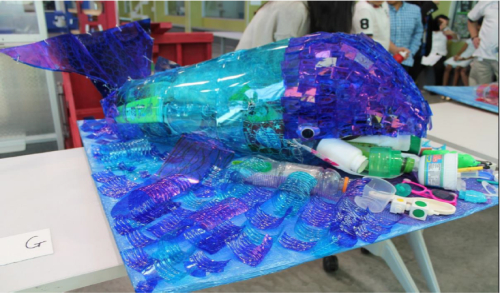 This year concentrated on the growing global issue of plastic pollution, exploring its problems and solutions through art and STEM at the Robert R. Shaw (STEAM) Centre, Texas. Art students were tasked with creating an exhibit inspired by the ocean and marine life, whilst STEM students submitted and presented ideas on possible solutions to the plastic crisis, with particular emphasis on the Great Pacific Garbage Patch.

In teams of two or more, young artists joined forces to create sculptures, collages and murals using only plastic waste, avoiding adding art litter to the environment, and were even encouraged to use marine plastic debris which they had found on the shoreline.

Submissions ranged from plastic sculptures of fish, collages of turtles and more, with the winning team ‘League of Anti-Plastics’ producing an outstanding sculpture of a whale in a plastic ocean – a stark reminder of the problem but a reassuring future outlook of an environmentally-conscious generation. Hot on the stern of the winning team were the ‘Sword Women of the Ocean and Sea Savers’ with some fantastic submissions that matched the brilliant team names of the day.

Students from grades 6-12 were also invited to come up with innovative ideas to solve the plastic pollution problem. Not only did this competition bring together students with an interest in the marine environment and inspire others to share this interest, but students also collaborated to utilise their diverse range of skills and shared their expertise, from writing to presenting and art to technology.

Around eight million tonnes of plastic enter the sea annually and to address this, each team submitted a proposal for a solution, equipped with annotated diagrams and a short video of themselves presenting their novel ideas. In front of a live audience, the shortlisted teams delivered 8-minute presentations of their suggestions to a panel of judges, with team R2 from 8th grade judged to be the most inventive and innovative team.

R2’s design was an excellent spin on the Ocean Cleanup’s work – a team of scientists and engineers led by Boyan Slat who developed a series of floating systems to sweep up plastic in the Great Pacific Garbage Patch. Adding their own touch, R2 redesigned this idea, adding solar-powered propellers to allow their proposed system to move even when ocean currents are weak.

All winners were awarded a $1000 prize, with runner-ups receiving $500 and third place participants $250. Teams who received an honourable mention in the art competition also received a $100 prize. Inspiring young minds to engage with environmental issues through branch events such as this is crucial to securing the future of conservation, and the positive reaction from the children and their thoroughly engaged participation shows great promise to the future outlook of the marine environment.

View the embedded image gallery online at:
https://www.imarest.org/policy-news/institute-news/item/4856-ocean-plastics-school-competition-coordinated-by-the-imarest-s-houston-branch#sigProId5a7e54dbd0
back to top