The Marine Professional moves to a new biodegradable packaging 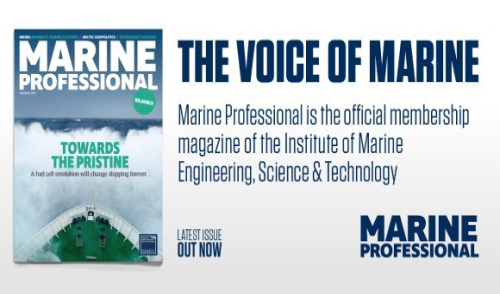 The IMarEST is delighted to announce the official relaunch of the Marine Professional magazine with a new publisher – Think Publishing. The first issue has been distributed this week which has been accompanied by our relaunch event held at the Nor-Shipping exhibition, Oslo, Norway. We hope readers will enjoy a host of improvements to the magazine, including its delivery in a new biodegradable wrapping.

The magazine will now be distributed to Corporate members subscribing to the printed version in a new fully biodegradable packaging. This is made from potato starches that break down within six months and its 100% compostable nature means it can be disposed of in your compost heap, garden waste or food waste bin.

While it may look like plastic, the potato-based packaging is a material known as a ‘Bioplastic’, which are thermoplastic polymers made from renewable resources such as natural and sustainable potatoes instead of crude oil. These Bioplastic granules can be processed on standard machines to produce thermoplastic resins, biopolymer materials which can be used in the same way as traditional synthetic plastics. All raw materials used in the production and manufacture of the Bioplastic are in compliance with relevant food contact directives.

The IMarEST recognises that, while it is certainly a strong step in the right direction in reducing its environmental footprint, it is not a perfect solution and we still remain some way off the zero-carbon aspiration that we have for the magazine. We are aware that there is not, yet a fully decisive and conclusive figure on the level of carbon footprint reduction that Bioplastics provide within the published literature and there is contention over their appropriateness within the marine environment – a topic heavily discussed at our Marine Plastics Roundtable event last December.

The IMarEST recognises the crucial need to take action in reducing the environmental impact of both its own and the wide marine industry’s activity. As such, we are very active in this area which has included the hosting of a roundtable event intended to discuss and form an industry response and action plan to the issue of marine-based plastic pollution. You can read the findings and proposed actions of these discussions in the full roundtable report.

However, we are pleased that the magazine is able to make such a substantial step in reducing its carbon footprint nonetheless – a move that is bolstered by a change in publication frequency and a greater digital news offering. The IMarEST plans to improve the magazines eco-friendliness, with an extensive and ongoing digital content portfolio and reducing the publication frequency of the magazine from twelve issues per year to six issues per year.

While the editorial content received over the course of the year will remain the same, with the content packaged into six larger ‘bumper’ issues, half the amount of printed issues per year will reduce its overall carbon footprint. The IMarEST vision going forward would be to gradually migrate the magazine towards full digitalisation in the future, with a view to becoming near-carbon neutral.  However whilst the demand from members to receive a hard copy of the magazine prevails we will take whatever measures are feasible to mitigate the impact as best we can.

The IMarEST is pleased to be able to offer this strategic, more environmentally friendly move given its vision of sustainably managed and developed marine resources and are extremely excited to take the magazine into a new era that the partnership with our new publishers presents.