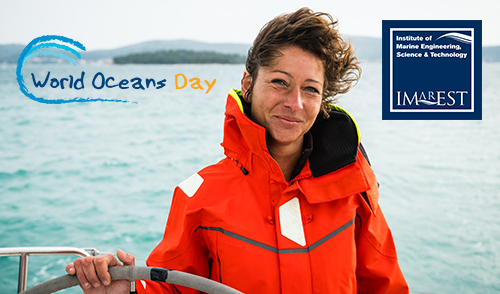 World Oceans Day - 8th June - is an annual celebration of the oceans and collaboration for a better future, with this year’s theme being “Gender and the oceans”. As such, the Institute of Marine Engineering, Science & Technology is celebrating World Oceans Day this year by announcing the launch of an IMarEST Women’s Network. The Network will be open to all members, both male and female, and the inaugural meeting will be held on Tuesday 9th July 2019 – you can join in person or virtually.

The network aims to build a forum for gender equality for its members and to harness their expertise and knowledge as role models and mentors for the next generation to promote a positive change - a change in the Institute itself, in the marine sector and hopefully across the wider engineering, science and technology industry. In developing a strong and explicit culture of inclusion, the IMarEST hopes to work by the philosophy of acting locally to succeed globally.

Gender equality is not just about bringing women together but about the equal valuing by society of both women and men. This network will undertake some targeted activities which might be needed to address some of the historical and social disadvantages affecting women entering the marine industry. It will do so by bringing men and women together - focusing on what unites us - a vision of a world where marine resources and activities are sustained, managed and developed for the benefit of humanity.

“There is an increasing recognition that achieving sustainable ocean development requires equal participation from women and men and whilst women are under-represented across the marine world - both in terms of the number in marine professions and the number working on policy and making decisions which impact women more greatly than men, such as in disaster response for example. The IMarEST is uniquely placed to address some of these key issues. We have networks that can be used to promote and advocate for gender equality, but we can also play a much wider role. The Institute can run events on topical issues, provide networking and career development support, train students, work with schools and universities to encourage women to study and take up careers in the marine sector, liaise with industry and other professional bodies and NGOs, and engage with the media and the general public”. Dr Bev MacKenzie, IMarEST Fellow.

“I am delighted to welcome the formation of the IMarEST’s Women’s Network today. On World Oceans Day, with its 2019 theme of Gender and the Ocean, it is highly appropriate that IMarEST should launch its campaign to address gender balance both within Institute and across the wider world of the marine industry. Our Institute and its vital work will be greatly enhanced with more inspiring women developing their careers as marine professionals”. Dr Andrew Tyler, IMarEST President.

This network must be shaped by our members and by the marine community. We welcome anyone interested in joining us to help create a vision for the IMarEST Women’s Network. The meeting will also highlight a number of global initiatives on gender and the ocean and will include the opportunity to participate in a Q&A with the IMarEST President and other IMarEST representatives on the scope and aims of the network.

In addition to the IMarEST’s Women’s Network launch, the UN will be hosting a live-streamed conference on World Oceans Day where attendees will share their stories on Gender and the Oceans. The United Nations and a number of specialist organisations representing women have been making a concerted effort to help the marine sector move forward and support women to achieve representation that is in keeping with the 21st-century expectations.

Alternatively, anywhere in the world, you can plan your own event using the resources from the World Oceans Day website.