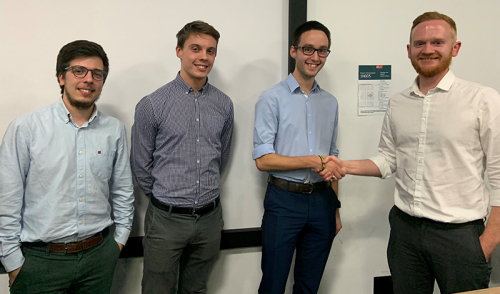 Monday 2 December saw the culmination of the 2019 Design Challenge held by the Western Joint Branch of RINA and IMarEST. The challenge is a biennial competition held for those in the earlier stages of their careers aimed at developing their problem solving, team work and management skills outside of their usual environment. The subject for each challenge is aimed to be linked to relevant challenges and issues being reported in the media at the time, with the requirement for this year being to design a system capable of removing items of macro plastic from the oceans.

Teams were made up of between 2 and 6 members and were required to produce their solution between mid-September and the finals night at the start of December. Competing teams spanned both students in further education and those in employment. The challenge was judged based on the production of a poster along with a 10 minute presentation and 5 minutes of questioning from a select panel of judges. The judges covered a range of appropriate areas with representatives from the National Oceanographic Centre, the Environment Agency, Houlder, Babcock and the IMarEST.

The designs produced provided a wide range of concepts covering static and propelled, single point collection and multiple autonomous ‘drones’, system based recycling and shore based recycling and so on. The standard of material and presentations was very high across all of the teams and the top 3 positions were separated by 4 points (out of a maximum of 500). The winning team was from the University of Southampton with their design Oceanum Nova, a repurposed catamaran dive support vessel collecting debris caught by floating barricades. The concept covered the design brief in impressive detail while also showing how it could be used in multiple different scenarios and locations.

The WJB holds monthly lectures alternating between Bath and Bristol between September and April alongside technical visits and is open to all. For any more information please contact the secretary at .

View the embedded image gallery online at:
https://www.imarest.org/policy-news/institute-news/item/5244-design-challenge-removing-plastic-from-the-ocean#sigProId4ed3507563
back to top