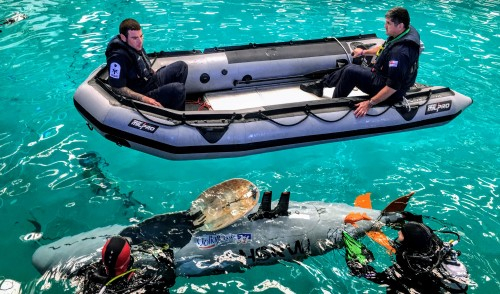 The IMarEST has announced that the fifth European International Submarine Races will take place over a fortnight from 7 - 17 July 2020, with QinetiQ, a defence technology company, as the principal sponsor for the event.

The races are a unique sporting and engineering challenge which involve teams from universities across the world designing, building and racing human-powered submarines around a slalom course at QinetiQ’s Ocean Basin, one of the world’s largest indoor freshwater tanks in Gosport, UK.

The team from the Canadian École de Technologie Supérieure won the 2018 races with their Omer 11 submarine.

Omer 11 was the first human-powered submarine to be equipped with interchangeable propeller and non-propeller propulsion systems. The team started the week with a standard two-bladed propeller, then moved to an even more efficient single-bladed prop to clinch the top speed of the competition by a male pilot. Finally, they swapped in their biomimetic propulsion system, which was inspired by the wings of a penguin or sea-turtle, and with a speed of 4.94 knots, beat the world speed record, which had stood since 2009, in the "non-propeller" division.

Some of the university teams that have already expressed an interest in taking part in eISR 2020 include:

If you are interested in sponsorship opportunities, please email . You can find out more about the races at www.subrace.eu.