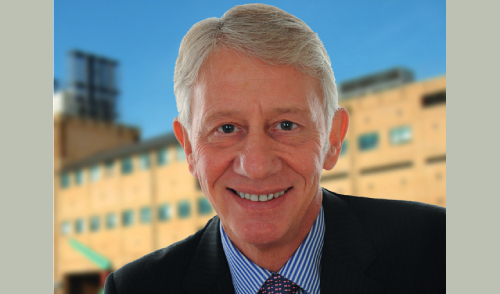 This article was initially published in the Jan/Feb 2020 issue of Marine Professional magazine.

With 40 years of experience in ocean engineering behind him, IMarEST Fellow Terry Sloane is a founder member of the Operational Oceanography SIG.

How did you get into Marine Science?

I knew instinctively what I wanted to do from an early age and set a course to achieve it. I remember watching the films of Hans and Lotte Hass, the amazing Jacques Cousteau and even Troy Tempest in Stingray. I just wanted to be an aquanaut. As a teenager, I had a passion for engineering, particularly electronics. I was introduced by my future wife to Jim Wardle, co-founder of WS Ocean Systems (later RS AQUA), who was a diver, electronics engineer and, at the time, technical director of oceanographic instrument manufacturer NBA Controls. That was it - the pieces fell into place and off I went. On Jim's advice, I studied electronics as a student apprentice at Marconi Space & Defence Systems, making sure I ended up in the naval division. Within a year of qualifying, I had moved away from underwater weapons into oceanographic instruments and joined NBA Controls as a design engineer, later rising to technical director when Jim left to start WS Ocean Systems .

What has changed most over your career?

Professionalism. When I started, the oceanographic instruments sector was populated by a number of very small but innovative companies that had only just migrated from garages and shared workshop spaces, servicing the relatively new offshore oil and gas sector with pretty rudimentary instruments. The larger players were almost all associated with military projects. The industry today is a very different place.

At Oceans of Knowledge 2019 you spoke about sensors supporting metocean observations. Can you elaborate?

Because of the huge amounts of data that are now routinely produced, end users need to be able to make use of this data in near real time. That means there can be a disconnect from the measurement. I believe it is vital not to overlook where the data comes from and the chain that enables its delivery. As I said in my talk: "All sensors are equal, but some are more equal than others." The quality of the sensor is reflected in the quality of the information and must be appropriate for the task. Trust in the provenance of information is vital, and this starts with the sensors. We have seen that information can be weaponised; meteorological and oceanographic data is not exempt. We are seeing the adoption of smart sensors and the underwater internet of things, and we need to protect against the threats that we see routinely in other sectors.

Terry Sloane is a Fellow of the IMarEST, a founder member of the IMarEST's Operational Oceanography SIG, chairman of the Society of Maritime Industries' Marine Science & Technology Group, director of the Society of Maritime Industries, managing director and owner of marine scientific instrument specialist Planet Ocean, and managing director and owner of micro AUV developer ecoSUB Robotics. He has been involved in ocean engineering in one form or another for 40 years.
He is a Fellow of the Royal Meteorological Society and a council member of the Challenger Society for Marine Science. He also delivers guest lectures in data-logging as part of university courses in marine archaeology.

How has awareness of climate change affected research?

Clearly, the general public is now much better informed. I am quite sure that our politicians see this increase in public interest and are keen to be seen to support it. This ripples down as funding for research and innovation, which in turn helps to fuel the 'ocean business'.

What's on the agenda for the Operational Oceanography SIG?

As well as being an interface between the IMarEST and international organisations concerned with ocean observations and forecasting, our aim is to guide and influence the provision of sustained marine measurements for analysis, prediction and assessment. This goes beyond marine science, shipping and defence. There are huge amounts of data being collected, often in a disjointed way. The environment has no borders, so a global approach to environmental data, particularly marine data, is essential.
One of our crusades at present is to help achieve proper funding and structure for UK-IMON, a UK-based integrated marine observation network that can bring together the disparate sources of marine data into one quality-controlled and accessible location. UK-IMON should then link into other similar networks worldwide.

What will the oceanographic research community need in the future?

Despite what I have said about the huge amounts of data available, under-sampling of our oceans remains a critical problem holding back our understanding of global processes, which do not stop at any geographical or even air-sea boundary. Collecting oceanographic data in high temporal-spatial resolution is expensive, whether it's from ships, moorings or fixed platforms. Autonomous systems can increasingly cover large areas of ocean in three dimensions quickly and cheaply, and working together with surface and airborne assets will go some way towards mitigating this. This requires us to push the boundaries of what is capable technically. That, therefore, involves multidisciplinary teams of scientists, engineers, technologists, economists, governments and entrepreneurs.

"We have seen that information can be weaponised; meteorological and oceanographic data is not exempt"

What R&D innovation most excites you?

This has to be ecoSUB, our micro autonomous underwater vehicle (AUV). It has been a while since I participated in any engineering of real significance, and this project has been invigorating. Working alongside engineers, technologists and scientists from my team and the Marine Autonomous and Robotic Systems team from the National Oceanography Centre (NOC) has been a real privilege. In brainstorming sessions, nothing is off the table and they rarely say no to challenges that others put forward. Being backed up by a strong commercial team that works hard to get the funding and manage the projects to completion has made my job easy. With so many possibilities, keeping the focus has been the greatest challenge, but setting out the target specifications, objectives and end goals early on has helped this, despite many distractions along the way, most of which we have been able to absorb and learn from. Most recent among these was the enhanced navigation capability LCAT (Low-Cost Acoustic Telemetry), which saw us team up with the NOC and Newcastle University to implement a network of vehicles equipped with acoustic telemetry. This enabled enhanced underwater navigation using artificial intelligence to improve navigation accuracy from 10% of distance travelled to+/- Sm total error, regardless of the distance travelled. It was quite an achievement at the target price point and in less than 18 months.

What is the biggest challenge for marine research?

Probably funding. The environmental problems facing us are huge, global and far-reaching. There are few, if any, boundaries to these challenges, but understanding the metocean environment is fundamental to them all. Some nations are reasonably well funded (but certainly not adequately) to undertake marine and meteorological research and innovation in solutions. Many others are not, and this means that measurements from different areas of the globe are disparate. Further, without adequate funding we cannot develop the technology, nor do the science, to acquire the information as fast as we need to, and in a joined-up way to inform policy. Compare the budget of the US National Oceanic and Atmospheric Administration with NASA's. Private investment can only go so far.