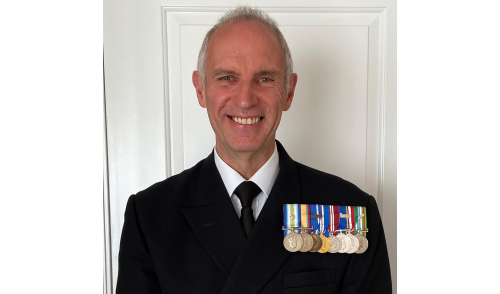 This article was initially published in issue 4 2020 of Marine Professional magazine.

How did you first get into the marine industry?

Growing up on the west coast of Scotland, my family, like many others, had strong historical connections with the sea and engineering. My father, who, like my grandfather, worked in John Brown’s Shipyard, took me to see the launch of the QE2. I still have the cinefilm he took that day. I stood in amazement looking at the sheer size and complexity of what those people had created. After that, there were many visits to the river Clyde with my father and my Observer’s Book of Ships; together with family tales of far-flung places like Singapore and the West Indies, I knew what I wanted to do. Off I went to South Shields Marine & Technical College to be a Royal Fleet Auxiliary (RFA) engineer officer cadet, where I would go on to study for all my Certificates of Competency.

What were your biggest career challenges?

I have always been frustrated by the lack of knowledge relating to maritime qualifications within our society and how they could map across to more widely known academic standards. I set myself a challenge to do whatever I could to promote awareness of our knowledge, skills and experience. I have worked with other like-minded people to promote the professional standing of marine engineers both within the maritime industry and in wider professional engineering circles. This has not been easy, as academia can sometimes be influenced by nothing more than intellectual snobbery and, ironically, ignorance.

The Class 1 Certificate of Competency is still a relatively unknown quantity in the wider engineering profession, and the academic and professional knowledge necessary to obtain one is still a mystery to many. Having obtained my master’s degree 10 years ago, I can compare the work that is required to obtain both, and it is clear to me that the maritime-based qualification produces a more rounded and capable individual.

Please tell us more about the RFA Streamlined Route to Chartered Status that you created.

The Streamlined Route was inspired by the fact that I had worked with many naval officers who had benefited from such a scheme in their service. It recognised and credited many of their career courses that we in the RFA also have to attend and pass alongside our naval counterparts.

We also had graduate cadetships, HND cadetships and the Class 1 Certificate of Competency, together with very many years of sea-going experience, and I thought it rather odd that we weren’t getting credit for that. It goes back to the fact that the Class 1 Certificate of Competency is largely unknown in wider, non-sea-going engineering circles. Ironic, in that our Institute was created for those very people who possess it. As part of routine committee business, I was fortunate to be introduced to Ben Saunders, who, with his background in education standards, had no preconceived ideas regarding academic equivalency of maritime skills, knowledge and experience, but majored in the facts. It was speaking with Ben that made me realise that the time was now right to push ahead with my long-held belief that we, as RFA engineers, were worthy of the appropriate professional registration at the different stages in our careers. Admiral Guild and Dr Marcus Jones were also very supportive.

It was then a case of mapping the courses, qualifications, skills and experience we require our people to have at the various points in their career to the standard required. Within the RFA, performance in each appointment held is formally assessed, so we know if individuals can actually perform at the required level and standard. The subsequent creation of formal RFA Career Development Frameworks has further integrated this route into the career progression of our people.

And we understand you are also a keen promoter of maritime careers?

I remember being told by my mentor in my early years that, as engineers, we make the world go round and I have never forgotten the enthusiasm he had for his profession. He was as old then as I am now and I share his passion. Engineering is a life-long obsession that lives and burns within those of us who chose the profession for the right reasons, and I love to see that unmistakable pride and passion in others when a problem is solved. It is what drives us, and it is very satisfying to give people that opportunity. I am actively involved in the Graduate Engineering Engagement Programme run by the Royal Academy of Engineering and attend its events, taking part in lectures at universities and subject matter expert panels, giving young students the benefit of my experience and hopefully enthusing them to remain in engineering and not drift off into the financial sector, which seems to appeal to many young engineering graduates.

I also mentor several young engineers and have done for many years – some are now chartered themselves, which, considering I recruited some of them from school, is enormously satisfying. After 41 years in this uniform, I never tire of promoting engineering careers and, even after I retire in 18 months, it is something I will continue to do.

If you could change one thing in the industry – small or large – what would it be and why?

I would ask that those involved in the design of their products (in my case auxiliary naval ships) think very carefully about the end result. I have campaigned long and hard for simple ships that can be maintained by their crews without routine recourse to OEMs. I need ships that can take a bit of punishment, be patched up and put back into the fight and operate off the beaten track far from home. I therefore need them to be robust and simple, not technological showcases just ‘because we can’. I want to see the satisfaction on the faces of the engineers who are therefore able to maintain them without support or assistance, because the OEMs can’t always be there during humanitarian crises, pandemics or wars.

This ability to diagnose problems and fix your own kit is why people become engineers in the first place. If you remove that ability and opportunity, you remove motivation and job satisfaction and, ultimately, you will remove the engineer, as there is no reason for that person to stay.