His Royal Highness The Prince Philip, Duke of Edinburgh   Featured 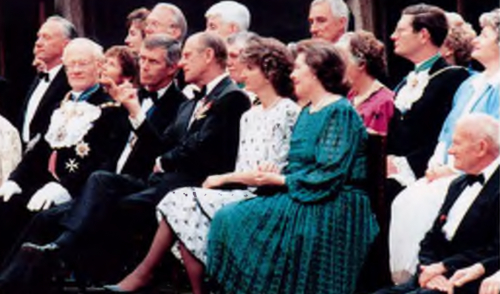 1989: Prince Philip with the President, RV Thompson together with the Lord Mayor of London, listen to the Band of the Royal Marines C&C Fleet at Guildhall as part of the Institute's Centenary celebrations

The Institute of Marine Engineering, Science & Technology sends its deepest condolences to Her Majesty the Queen and the Royal family at the passing of His Royal Highness The Prince Philip, Duke of Edinburgh. Our thoughts are with them at this difficult time.

Prince Philip had a long history with the IMarEST, having been an Honorary Fellow since 1949, he laid the foundation stone of our headquarters - the Memorial Building in Mark Lane - in 1955 and became the 68th President of the Institute (then known as the IMarE) in 1962.

He had an enduring love of the sea and a distinguished naval career. His passion for engineering and technology and his interest in naval history made him a respected and valued member of the maritime community. He contributed towards many activities across the marine sector throughout his life. His enthusiasm and support will be greatly missed.

Members of the Institute are invited to share their thoughts and messages in remembrance of HRH Prince Philip, Duke of Edinburgh.

1989 - At the Institute's Centenary celebrations