THE Institute of Marine Engineering, Science and Technology (IMarEST) has launched a campaign to boost the number of female engineers following National Women in Engineering Day. 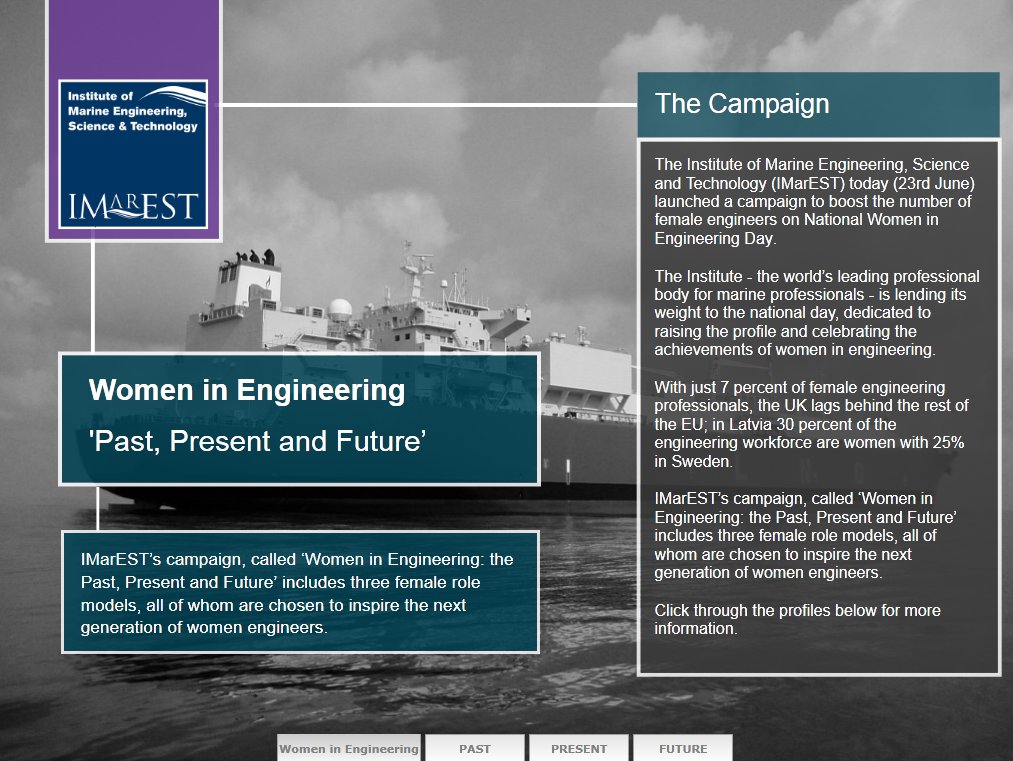 The Institute - the world’s leading membership body for marine professionals - lent its weight to the national day (which was on Monday 23rd June), dedicated to raising the profile and celebrating the achievements of women in engineering.

The campaign, ‘Women in Engineering: the Past, Present and Future’, includes three female role models, all of whom are chosen to inspire the next generation of women engineers.

The first, representing the remarkable pioneers of women in marine engineering, is the redoubtable Victoria Drummond who became the first female member of the Institute (then the Institute of Marine Engineers) after joining in 1921.

Victoria, who died in 1978, was awarded an OBE and the Lloyds War Medal for Bravery at Sea after singlehandedly keeping the engine room on the SS Bonita running while under attack from the Germans.

Women currently working in the industry are represented by Claudene Sharp, 40, a Fellow of the IMarEST and one of the best qualified female engineers working in the world today. Her career as a marine professional includes 12 seafaring years when she was responsible for the engines of some of the biggest ships in the world.

The future of female engineers is represented by Rachel Stevenson, a graduate in Naval Architecture and Ocean Engineering, from the University of Strathclyde who now works in vessel design and construction for Lloyds Register.

Women involved in the campaign acknowledged the difficulties they had faced but agreed the barriers have lessened.

Claudene Sharp said: “Being a woman has had its challenges. When I started at sea there were very few females at sea and it was a battle at times to be seen as an equal. I did my job but I had to do it well because with so few woman in focus, if you made a mistake it stood out. Through the years though, that has changed and I believe it is not as challenging as it was then.”

Rachel Stevenson said: “I think my career path is quite typical. I wanted to do engineering because I found maths and physics easier than languages and the other sciences. I loved to sail and felt naval architecture and ocean engineering would nicely combine my academic strengths and my love for the sea.”

Dr Carol Marsh, from the Women’s Engineering Society which organised today’s National Women in Engineering Day, said: “We are delighted the IMarEST is joining the campaign to promote women engineers. As one of the most respected industry professional bodies in the world, its influence is far reaching. We hope by promoting female role models, the ‘Past Current and Future’ campaign will encourage future generations of women engineers.”

The campaign is set to form part of a larger programme, profiling marine role models in a bid to raise awareness of the industry and the exciting careers that the maritime sector can provide.

Read Past, Present and Future profiles