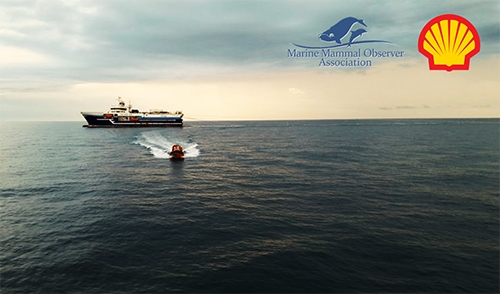 Shell has partnered with the Marine Mammal Observer Association (MMOA), a partner of the IMarEST, for their Balkanide 3D seismic survey project and has adopted the MMOA position statements and best-practice guide for contracting suitably qualified Marine Mammal Observers (MMOs) and Passive Acoustic Monitoring (PAM) Operators.

During the tendering phase of the project, Shell utilised the MMOA position statements, analysed CVs from multiple agencies and took preference in their selection by favouring evidence for:

MMOs and PAM Operators who deliver a consistently reliable and high standard of professional service are an important aspect in the success of offshore projects.

The strength of the MMOA, and its ability to improve the MMO service, lies in its experienced membership and the support it has from the wider offshore industry.

To avoid any impact on Black Sea fauna, four Marine Mammals Officers (MMOs) and Passive Acoustic Monitoring (PAM) are stationed on board the seismic survey vessel to keep a continuous watch and ensure no marine mammals are in the vicinity of the seismic source and a “soft start” procedure is applied to allow marine mammals to move away before the seismic acquisition starts.

A marine mammal observer (MMO) is a professional in environmental consulting who specializes in whales and dolphins. When on board the seismic vessel, the MMO's job is two-fold: to spot sensitive wildlife species and to monitor adherence to the previously agreed upon guidelines, which in some cases may include complete halt of operations should the MMO decide it is necessary.

Spotting, and identifying, animals involves long hours of visual surveys. Detecting cetaceans with hydrophones is known as Passive Acoustic Monitoring (PAM), and this is an increasingly common technique used in addition to visual surveys, mostly during the night when visual access is impaired. Ensuring adherence to guidelines requires a thorough knowledge of the regulations, understanding of the operations and the ability to communicate effectively with the crew.

The “soft start” procedure, endorsed by both the seismic team and the professional MMOs and PAM operators on board, is a safe way to protect marine mammals by reducing the power of the compressed air device, thus warning the mammals about the operations and allowing them to move away safely before the seismic acquisition commences.