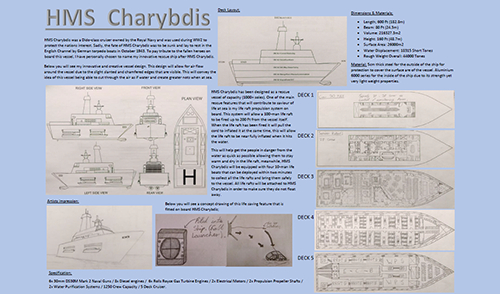 In April 2018 the Royal Navy and UKNEST launched a flagship initiative as part of their contribution to the national pan-Government Year of Engineering 2018 (YOE18) campaign, aimed at raising the profile of engineering in society.  The RN-UKNEST Naval Engineering Competition challenged schoolchildren to design a vessel capable of rescuing up to 1000 people from the sea, reflecting the significant Humanitarian role of the Royal Navy.  The competition had three age categories, tied to the National Curriculum’s Key Stages, with the best three designs from each age category eligible to win an iPad for their school, college or youth organisation.

The competition closed to entries on 1 Dec 18, by which time over 200 entries had been received from across the UK.  With teachers and youth leaders coordinating inputs from groups of children, over 1200 children have been directly involved.  And with around 5000 leaflets handed to ‘gatekeepers’ (teachers, parents and guardians) and children at over 280 events through the year thousands more have been engaged by the Royal Navy.

In judging the entries, Captain Matt Bolton Royal Navy said “The standard of entries was particularly high making the competition extremely difficult to judge.  It was fascinating to see the attention to detail and how the children came up with innovative solutions to this difficult problem.  The RN-UKNEST Naval Engineering Competition has challenged young people to think in a different, more analytical, way and I hope it will inspire them to harness their creativity in solving real-world problems leading to a rewarding career in engineering.”

The entrants’ imaginations certainly ran free with the creativity that has been promoted through the YOE 18 campaign.  The use of conveyor belts and nets to rescue people from the sea, stress and pet rooms to relieve tension, as well as a strong awareness of environmental issues all combined to provide some highly imaginative and distinctive designs.  It was obvious from the range of submissions that a considerable amount of time and effort has gone into their creations.  It is pleasing to announce that the following schools won in each age category:

Each of the winners has been notified directly and plans are in hand to present the winners with their prizes.

The Year of Engineering 2018 is a national Government-backed campaign which is seeking to raise the profile of engineering in society by highlighting the way engineers are involved across our everyday lives and by encouraging young people to take a closer look.  As partners of the wider national campaign, the Royal Navy and UKNEST are looking to demonstrate that engineers are integral to every aspect of naval business and form the ‘beating heart’ of operational capability, ensuring that every ship, submarine or naval aircraft is prepared, maintained and sustained on operations, whenever needed, worldwide.

As the YOE18 campaign transitions to the ‘Era of Engineering’ the Naval Engineering Competition will become an enduring legacy of this year’s campaign and plans are already underway for a similar competition to be run in 2019.