Urging engineers to get involved in Tomorrow's Engineers Week! 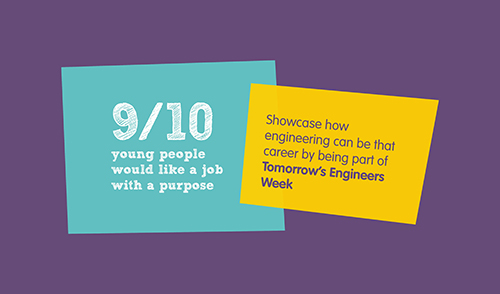 EngineeringUK and the Royal Academy of Engineering have called on engineers and engineering technicians across the UK to get behind plans for Tomorrow’s Engineers Week (4-8 November 2019, #TEWeek19).

Now in its seventh year, Tomorrow’s Engineers Week provides a unique opportunity for engineers, employers, universities and schools to showcase how engineers working in all sectors are on a mission to make the world a better place.

Highlights of the Week include the first This is Engineering Day on Wednesday 6 November to challenge the public stereotype of the engineer, a series of films celebrating engineers on a mission to help the nation’s health and well-being, as well as the second Tomorrow’s Engineers Week Big Assembly.

Employers, professional bodies, universities, schools and individual engineers are invited to get involved to help inspire the next generation of engineers by downloading toolkits of ideas at www.tomorrowsengineers.org.uk/teweek.

“Tomorrow’s Engineers Week provides an opportunity for the engineering community to work together to inspire the next generation of engineers. The number of professional engineering institutions, engineering employers and individual engineers who participate in this collective drive to raise the profile of engineers grows each year.

“Whether it’s visiting a school to talk about engineering careers as part of the Big Assembly, staging an event to celebrate what engineers do or supporting Tomorrow’s Engineers Week on social media there are lots of ways to get involved.”

The Wednesday of Tomorrow’s Engineers Week will see the Royal Academy of Engineering unveil the next major moment in its This is Engineering campaign, This Is Engineering Day, a new national awareness day dedicated to publicly celebrating the engineers and engineering technicians shaping society and solving global problems.

To help the public better understand engineers and engineering, the Royal Academy of Engineering will be creating a public online photo library of more representative images of engineers, and launching a challenge to use this to change the mix of images that appear when you search for ‘engineer’ online.

Hayaatun Sillem, Chief Executive of the Royal Academy of Engineering, said: “Engineering and technology play an incredible role in shaping the world around us and in addressing some of society’s biggest challenges, from providing a sustainable supply of food, water and clean energy, to advancing healthcare, and keeping us safe and secure. We know that young people increasingly want to tackle these issues and make a difference in the world, but unfortunately a lack of understanding of who engineers are and what engineering does in the 21st century is stopping young people from considering it as a career.

“Engineering has so many extraordinary opportunities for young people, but the UK has a shortfall of 59,000 engineers every year, while only 12% of professional engineers are female and  9% are from black, Asian and minority ethnic backgrounds. We hope that This is Engineering Day can shine a light on who engineers really are and what they do, so that we can banish the outdated stereotypes that prevent young people  from seeing a future for themselves in this crucial and rewarding profession”.