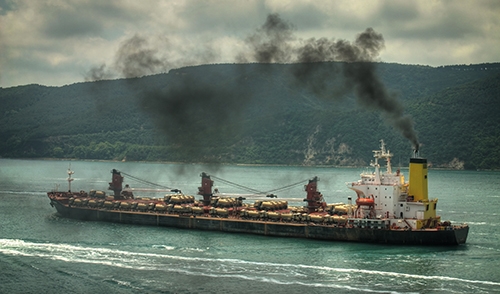 This report aims to provide a short, informative summary of the key discussions and outcomes of the latest session of the IMO Marine Environment Protection Committee (MEPC 70) and provide an overview of the IMarEST engagement in the work of this Committee.

The IMarEST actively contributed to the work of the following Working Groups, Revision Groups and Drafting Groups:

MEPC 70/7/2 Reduction of GHG emissions from ships
“Issues relating to the use of fuel oils from non-petroleum sources”
Submitted by the Institute of Marine Engineering, Science and Technology

This paper analyses regulation 18 on fuel oil quality of MARPOL Annex VI, in particular refers to Regulation18.3.1 for fuel oils from petroleum refining, and 18.3.2 for fuel oils from sources other than petroleum. The use of non-petroleum sourced fuel oils could be a long-term goal of IMO in order to ensure that shipping can play its part in reducing the input of carbon to the atmosphere via the combustion of fossil fuels. The paper highlights, however, that at present, there are a number of issues regarding the technical applicability of regulation 18.3.2 which deals with non-petroleum fuel oils. These provisions do not give guidance as to the status of fuel oils which are blends of both petroleum and non-petroleum derived fuels. This point is particularly pertinent to biodiesels which are typically blends of petroleum derived distillates and fatty-acid-methyl (or elthyl) -esters (FAME) derived from a variety of organic source materials.


Summary: MEPC 70/9/2 Pollution prevention and response
“Guidelines for on board sampling for the verification of the Sulphur content of fuel oil used on board ships”
Submitted by the Institute of Marine Engineering, Science and Technology

At MEPC 70, Committee will consider the Guidelines for onboard sampling for the verification of the Sulphur content of fuel oil used on board. The guidelines provide an agreed method for sampling to enable effective control and enforcement of liquid fuel oil used on board ships under the provisions of MARPOL Annex VI. This paper provides comments on the safety of on-board fuel oil sampling required to be undertaken in accordance with the draft guidelines being considered at this session. On-board fuel oil sampling is already a routine engine room task which, by the application of good engineering practice, is undertaken in a safe and secure manner.

The BWM Convention will enter into force on 8 September 2017. Canada, Marshall Islands, Republic of Korea and IMarEST suggested that the effective implementation of the Convention could require a collaborative approach and need to be tackled from all the stakeholders involved in the process at IMO MEPC. In this respect, the authors proposed that all the stakeholders should design a Roadmap for implementation of the BWM Convention. It is suggested that the experience-building phase of the Roadmap for implementation should be structured to form three stages: data gathering, data analysis and Convention review.


MEPC 70/INF.23
“A template for the completion of a biofouling management plan”
Submitted by IMarEST and IPPIC

During this session, there was a long discussion over the environmental and economic value of the Arctic region. In this context, several papers presented at this session were related to the effects of shipping incidents in this region, and in particular, on the impacts of use and carriage of heavy fuel oils (HFOs).

The Polar Code is expected to enter into force on 1 January 2017 for SOLAS and MARPOL and 1 January 2018 for STCW. In particular the STCW Convention will deal with training and certification of deck officers and masters required under the Polar Code. Once approved, the amendments to Chapter V of STCW will include requirements for sea service, certification, revalidation, transitional provisions and minimum standards of training for deck officers and masters serving on vessels operating in polar waters.

Once in force, the Polar Code could be opened for amendments to include more stringent environmental provisions. To date, the PC is mandatory for safety measures and for pollution preventive measures trough amendments to MARPOL (operational pollution) but it is of recommendatory nature for environmental issues. Essentially, to date, Member States can only be encouraged not to use and carriage HFOs in the Arctic.

During MEPC 70, it was announced that IMO and the Arctic Council will work together to ensure an effective implementation of the Polar Code.

If you’d like to get more involved in work relating to the Arctic, you can join the IMarEST Arctic SIG as a corresponding member through Nexus.

Over a course of years, IMO MEPC has developed several guidance documents to help the Member States to develop and implement effective preparedness and response measures. These guidance documents need regular updating and reviewing. During this session, the Committee adopted the updated version of the guidance entitled “Section II of the Manual on Oil Pollution Contingency Planning”.

Moreover, the Committee adopted the Guide on Oil Spill Response in Ice and Snow Conditions, and agreed on the need to produce guidelines on practical methods to implement the OPRC Convention and OPRC-HNS Protocol.

If you’d like to get more involved in work relating to pollution and response, you can join the IMarEST Responses for Marine Pollution SIG as a corresponding member through Nexus.

A PSSA is an area that needs special protection through action by the International Maritime Organization (IMO) because of its significance for recognized ecological or socio-economic or scientific reasons and which may be vulnerable to damage by international maritime activities.

At the time of designation of a PSSA, an Associated Protective Measure is adopted by IMO to prevent, reduce or eliminate the threat or identified vulnerability.

Consideration and adoption of amendments to mandatory instruments

MEPC 70 adopted amendments to MARPOL Annex V that will make it mandatory for shippers to declare whether a cargo is classified as harmful to the marine environment (HME), where the amendments will enter into force on 1 March 2018. Moreover, the Committee agreed to amend the form of the garbage record book to specifically identify bulk cargo residues as either HME or non-HME.

If you’d like to get more involved in work relating to pollution and response, you can join the IMarEST Responses for Marine Pollution SIG as a corresponding member through Nexus.

A study undertaken on behalf of the International Maritime Organization (IMO) was discussed at MEPC 70. This report found that there are no major barriers to producing enough compliant bunkers to meet a 0.50 percent global sulfur cap in 2020. Further to this the Committee agreed:

Black carbon is the second major contributor to climate change after CO2. Black carbon refers to solid particles emitted during the incomplete combustion of fossil fuels, biofuels and biomass. MEPC70 reminded Member States that, in order to tackle climate change, PPR 3 had developed a measurement reporting protocol for voluntary data collection of Black Carbon from shipping and invited interested members to use the protocol and submit data to future session of PPR.

If you’d like to get more involved in work relating to black carbon, you can join the IMarEST Emissions from Shipping SIG as a corresponding member through Nexus

The Amendments to MARPOL Annex VI requiring mandatory fuel oil consumption data collection and reporting have been adopted. These will enter into force on 1 March 2018, with the first reporting period being for the 2019 calendar year.

MEPC 70 adopted the data collection system and submission. Moreover, at this session, the Committee approved a roadmap (2017 through to 2023) for developing a “Comprehensive IMO strategy on reduction of GHG emissions, which is based on the voluntary data collection. Ship owners and operators will need to start considering the means for collecting the fuel oil consumption data that is most appropriate for each ship and updating the SEEMPs of their ships to reflect this process.

Regular Inter-sessional meetings on GHGs have been established (starting pre-MEPC 71) to discuss further progress on the IMO Strategy on GHG emissions from ships.

Key dates for the GHGs developments are:

MEPC 70 approved a set of substantial revisions to the G8 Guidelines that were prepared by an Inter-sessional Working Group (IS WG_ BW 1), which met the week before MEPC 70. The Committee also agreed that the G8 Guidelines are to be reviewed and revised into a mandatory Code at a subsequent session of the Committee. The revised G8 Guidelines recommends that BWT systems installed on board ships on or after 28 October 2020 should be approved taking into account the revised Guidelines (G8); and prior to 28 October 2020 should be approved taking into account either resolution MEPC.174(58) or preferably the revised Guidelines (G8) approved at MEPC 70. The revision also provides greater robustness and transparency to the Type Approval process, which should be applied when approving ballast water management systems not later than 28 October 2018.

The IMarEST contributed to the work of the ISWG_BW1 with experts from the Ballast Water Special Interest Group.

For PPR 4 submissions on methodologies for the determination of viability of organisms, the nine-week deadline is relaxed to 25 November 2016 .The seven-week deadline remains unchanged. PPR 4 is scheduled to take place 16-20 January 2017

At MEPC 70 there was a lack of a clear decision on a single implementation scheme for complying with the D-2 biological standard following entry into force of the Convention for ships constructed prior to 8 September 2017, therefore two proposed schemes will be considered at MEPC 71 in July 2017:

Under the provisions for amending the BW Management Convention, MEPC 71 will then need to approve and circulate for adoption at MEPC 72, in March 2018, the agreed revised implementation scheme.

If you’d like to get more involved in work relating to ballast water, you can join the IMarEST Ballast Water SIG as a corresponding member through Nexus.

A correspondence group on data collection system for fuel consumption will be re- established. The IMarEST will be represented by members of the Emissions from Shipping SIG.

A correspondence group on the road map for the implementation of the BWM Convention has been established. The IMarEST will be represented by members of the Ballast Water SIG.

As a member, you can log in to the website and join the Emissions from Shipping SIG or the Ballast Water SIG as a corresponding member on Nexus.

A correspondence group on the road map for the implementation of the BWM Convention has been established. The IMarEST will be represented by members of the Ballast Water Special Interest Group.

PPR 4 is scheduled to take place on 16-20 January. For PPR 4, submissions on methodologies for the determination of viability of organisms, the nine-week deadline is relaxed to 25 November 2016. The seven-week deadline remains unchanged.

Inter-sessional WG on IMO Strategy on GHG emissions from ships prior to MEPC 71:

MEPC 72 is attentively scheduled for spring 2018.