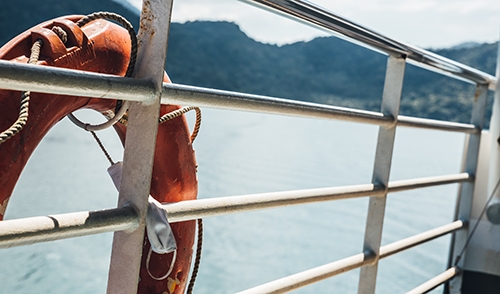 The aim of this report is to provide an overview of the key discussions and outcomes of the 98th session of the IMO Maritime Safety Committee (MSC 98) which is relevant to the IMarEST’s work.

Consideration and Adoption of Amendments to Mandatory Instruments

The MSC 98 having considered the proposals in plenary, established the Drafting Group on Amendments to Mandatory Instruments and adopted the proposed amendments to:

It also approved the Revised Guidance for watertight doors on passenger ships which may be opened during navigation and the draft revised MSC circular on Lists of solid bulk cargoes for which a fixed gas fire-extinguishing system may be exempted or for which a fixed gas fire-extinguishing system is ineffective (MSC.1/Circ.1395/Rev.3).
If you wish to see the full report of the Drafting Group, please email .

Concerns are often raised about the time it takes for SOLAS regulations to be updated after a practicable solution or procedures to an urgent safety issue has been identified. For this reason, IMO is exploring pathways to fast-track amendments and/or allow for early implementation.
Following a decision made at MSC 97, a new item on ‘Early implementation/application of IMO instruments’ was included on the MSC 98 agenda with a view to reviewing matters related to early implementation/application of amendments to SOLAS and related mandatory instruments, including corrections to existing provisions in force or about to become effective.
Following the establishment of the WG 2, the Committee approved the report in general and, in particular:

If you wish to see the full report of the Working Group, please email .

How to deal with the problem of cyber risks has been a major subject of discussion at the previous sessions. The meeting approved the new guidelines and emphasised that the ISM Code offers an existing framework for assessing vulnerabilities in vessel systems and establishing safeguards against these.
In particular, the MSC 96, having considered the urgent need to raise awareness on cyber risk threats and vulnerabilities, had approved MSC.1/Circ.1526 on Interim guidelines on maritime cyber risk management. Following the work of FAL 41 on facilitation aspects and bearing in mind that these guidelines had been drafted in general terms to address both cyber risk management on ships and ashore, the MSC 98 approved MSC-FAL.1 Circular on Guidelines on maritime cyber risk management using the same text as the interim guidelines.
Noting that these guidelines are non-mandatory, the Committee also considered the U.S. proposal that cyber risks should be appropriately assessed and managed in accordance with the safety management requirements of the ISM Code and, in this respect, shipowners and operators should be required to incorporate cyber risk management into their safety management systems no later than the first annual verification of the company's Document of Compliance following their next renewal after 1 January 2018.
Following the establishment of the WG 3, the Committee approved the report in general and, in particular:

For more information on how the IMarEST plans to address these issues, please join the Maritime Cyber Risk Management SIG.

A submitted proposal identifying the need for a regulatory framework for Maritime Autonomous Surface Ships (MASS) was extensively discussed and found general support. The Committee noted that the IMO needs to take the lead on this issue as work is already taking place in some member States and international organizations. It has also highlighted the need to take into account the human element and legal aspects. In order to move forward, attention was drawn to the importance of establishing a clear, unambiguous definition of MASS, which prompted a discussion on suitable terminology for cases of semi-autonomous ships that may still have a small number of crew on board.
The Committee decided to conduct a scoping exercise and it was proposed to put a new work item on the provisional agenda of MSC 99 titled “Regulatory scoping exercise for the use of maritime autonomous surface ships (MASS)”.
The IMarEST recognising the importance of this issue has co-sponsored a paper titled “Impact of new and advancing technologies to maritime transport and the regulatory framework” together with Denmark, Estonia, Finland, Japan, Norway, Singapore and Sweden. If you want to read the paper submitted to the MSC 98, please visit the IMarEST Virtual Library by following the link: https://www.imarest.org/resources/the-virtual-library
The IMarEST has recently established a new Special Interest Group on Unmanned Surface Vehicles. Please follow the link Unmanned Surface Vehicles SIG for more information and email with your interest to get involved with the Group.
The MSC 98 also agreed to include as new work programme in the post-biennial agenda of MSC the following:

A lengthy discussion was held under ‘Any Other Business’ relating to consistent, safe and effective implementation of the global 0.50% sulphur limit for fuel oil used on ships due to take place on the 1 January 2020. The MEPC 70 had requested PPR 4 to prepare a draft justification and scope for a new output on what additional measures may be developed to promote consistent implementation of the 0.50% global sulphur limit, for consideration at MEPC 71.
The Committee emphasised that the requirement in SOLAS chapter II-2 for the flashpoint of oil fuel remains at 60 ºC for ships that do not comply with the IGF Code and repeated that the use of oil fuel with a flashpoint below 60 ºC is limited to ships that comply with the IGF Code, except as otherwise permitted in SOLAS regulation II-2/4.2.1. The Committee also encouraged interested member States and international organizations to submit proposals to the CCC Sub-Committee with a view to developing specific requirements for low-flashpoint oil fuel, within the context of the IGF Code only. The MSC 98 invited MEPC 71, when considering the draft justification for the proposed output on "Consistent implementation of regulation 14.1.3 of MARPOL Annex VI" developed by PPR 4, to explicitly add, in the scope of the proposed output, considerations on the safety implications relating to the option of blending fuels in order to meet the 0.50% m/m sulphur limit. It instructed PPR to report any safety issues that may be identified with regard to low-sulphur oil fuel, subject to the aforementioned proposed output.
If you are interested to know more, please join the Alternative Fuels for Shipping SIG.

A Working Group on Goal-based Standards (WG1) was established with instructions to finalise draft amendments to parts A and B of the GBS Verification Guidelines, and to update the revised timetable and schedule of activities for the implementation of the GBS verification scheme.
Following the deliberations of the WG1, the Committee approved the report in general and, in particular:

For more details and for full report of the Working Group, please email

The IMarEST is looking to strengthen its technical team with volunteers who wish to participate in the IMO work and have an expertise in Ship Design and Construction, Ship Systems and Equipment, Navigation, Communication, Search and Rescue and Maritime Safety. If you are the person we are looking for, please e-mail for more information.