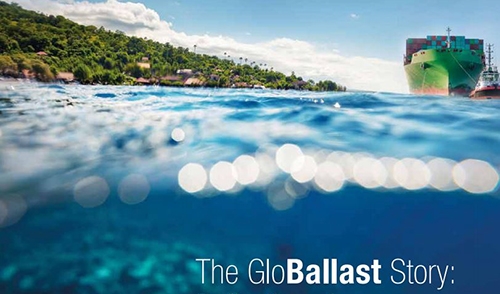 The GEF-UNDP-IMO GloBallast Partnerships Programme has produced, in collaboration with IMarEST, a 90-page report on the programme, which concluded this summer just prior to the IMO’s Ballast Water Management Convention entering into force in September.

The high-quality publication, entitled “The GloBallast Story: Reflections from a Global Family”, was specially commissioned by the IMO to chronicle the history of this transformative project, as well as explain its rationale and values and highlight key waypoints reached from its inception in 2000 through to its close this year.

GloBallast was a joint initiative supported by the Global Environment Facility (GEF) and United Nations Development Program (UNDP) and executed by IMO fundamentally aimed at preparing and building the capacity of developing countries to implement the Convention’s requirements into their national legislatures, as well as provide practical training to surveyors and other stakeholders who will eventually be charged with enforcing and policing the instrument. The project also engaged with the shipping industry and academia to promote the exchange and flow of technical expertise among a broad cross-section of maritime stakeholders.

After introducing the threat that unmanaged ballast water exchange poses to maritime diversity and potential indirect consequences on human activities, the report has chapters dedicated to encouraging technical cooperation, working with the private sector, driving innovation and building regional alliances among others.

Many of these chapters were informed by face-to-face to interviews between the IMarEST’s Technical & Policy Department and key individuals in the project, subject matter experts, and, most importantly, officials from the 21 partner countries that benefited directly from the tangible aspects of the capacity-building program. Laid out in a contemporary format, The Globallast Story is also lavishly illustrated with a mix of infographics and photos to stimulate and maintain reader interest.

IMarEST was heavily involved in GloBallast throughout its duration. Mainly through the auspices of its Ballast Water Expert Group, the Institute contributed to the IMO-GloBallast R&D forum and initiated an acclaimed series of international technically-themed conferences that consistently addressed the major topics of debate and challenges facing stakeholders.

Following the success of GloBallast, the GEF has recently greenlighted the GloFouling, a new project to address the transfer of aquatic species through biofouling, in other words, the build-up of aquatic organisms on a ship’s underwater hull and structures. This successor project will embrace many of strategies employed in GloBallast to build capacity in developing countries to reduce the transboundary introduction of biofouling-mediated invasive aquatic species. IMarEST firmly intends to take a similarly pro-active role in contributing to this new undertaking. To learn more or get involved, email with GloFouling in the subject line.

You can download a PDF of ‘The GloBallast Story: Reflections from a Global Family’ below.

Invasive alien species that are transferred via ballast water and on ships’ hulls can disrupt local ecosystems, and consequently threaten local economies and livelihoods. Experience shows that once invasive alien species have been introduced and established, they are virtually impossible to eradicate. IMO’s Ballast Water Management Convention was engineered to prevent their transmission and arrival in the first place, which is commonly held to be the most effective and pragmatic solution to this environmental threat.