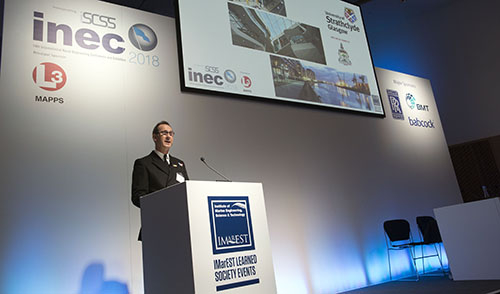 This year’s International Naval Engineering Conference (INEC) 2018 provided a unique opportunity for naval engineers across all domains and from around the globe to convene under a single roof and debate the latest developments.

The overarching theme of the gathering, this year held at the Technology & Innovation Centre of the University of Strathclyde, Scotland, was ‘Inspiring Naval Engineering’, as exemplified by the wide-ranging and multi-stream programme planned for the three days.

Proceedings opened with an uplifting welcome by the University’s Principal & Vice-Chair Sir Jim McDonald FREng FRSE, who divulged his intimate familiarity of the subject gained during his time as Rolls-Royce Chair in Electrical Power Systems throughout the 1990s and early 2000s.

The first of three keynotes was given by Rangesh Kasturi, who shared insights gained over a 35 year career in naval control systems, pinnacling in his current role as president of L3 MAPPS, the event’s principal commercial sponsor. Delegates then heard thought-provoking perspectives from Rear Admiral Paul Methven, who currently heads up the submarine acquisition at the Royal Navy and from Commodore Peter Knipping MBE, chief naval engineering officer at the Royal Netherlands Navy.

Technical discussions began in earnest with a presentation exploring naval combatant power system design to support future warfighting, in a joint paper by US Navy, Rolls-Royce UK and Herren Associates. Attempts to support new weapons and advanced mission systems with conventional power systems may be insufficient and could ultimately degrade mission performance. The case was argued for a ship-wide common energy storage architecture rather today’s approach that involves an unwieldy and pretty unscalable patchwork system-specific dedicated solutions.

Dr Benson from Delft University of Technology assessed how the maritime sphere might leverage developments in autonomy from other domains, such as road vehicles, aircraft and even space systems. Rather than reinventing the wheel, he sought to identify commonalities in navigation and control, energy management, and remote communication which might be adapted to naval setting with relative ease.

Stepping away from technology but remaining true to the conference’s overarching theme of inspiration, the Royal Navy’s Captain Mike Rose addressed the recruitment challenges that currently face many navies around the world. The Royal Navy, for instance, knows it needs to improve the ‘long-term talent pipeline’ ahead of anticipated shortfalls in personnel. Rose described a number of STEM initiatives already underway and suggested a variety of approaches and actions to boost their efficacy and encourage more young people with an interest in engineering to consider a naval career.

After the opening plenary, the conference split into parallel sessions. The stream on submarines considered, among other topics, a solution for supporting the simultaneous yet sometimes conflicting demands and constraints for boat availability, safety and costs; and a novel approach to reconcile the design of boat surfaces and compartment partitioning being pioneered as part of the Royal Netherlands Navy’s Walrus class replacement programme.

The systems engineering stream opened with a case-study on the integration challenges of upgrading and installing new equipment on the Royal Navy’s Type 23 Frigate, which has nearly doubled its initial 18-year design life. A presentation from Rolls-Royce mapped out the systems engineering challenges, both technical and regulatory, being encountered in the development of unmanned surface vessels.

BAE’s Andrew Edmondson meanwhile outlined a workflow for accommodating and managing the through-life design requirements of new naval platforms. While in the commercial world the capability requirement is clear from the outset, in the military sphere, even the functional intent can sometimes be ambiguous. The challenge is further compounded by the fact platforms may remain in operation for almost half a century and eventually be used in scenarios immeasurably different from those originally anticipated.

The sessions dedicated to the integration of electric weapons continued to be dominated by discussions on ways to deliver the immense bursts of power needed by these systems. Experts considered the problem respectively from the context of small-ship power platforms, pulse load operation, and energy storage on medium-voltage direct current grids.

Day two got underway with a ten-year report card from the International Navy Safety Association (INSA), a body set up by NATO to develop a safety code for benchmarking naval ship rules and classification requirements. In addition to celebrating the code's development, its use on a number of recent warship projects and future plans were discussed. A separate presentation considered efficient procurement for low vulnerability warships.

The stream on damage control and survivability tackled the ever-present challenge of fire-fighting in machinery spaces; the role of integrated platform management systems in handling battle damage; new thinking in signature monitoring and management to thwart – or at least understand susceptibility to – detection by enemies; using the Markov Chain, a statistical algorithm to predict possible events based on probability of prior ones, to inform platform design to reduce vulnerability.

The role of modelling and simulation in the preparations for the first flight trials aboard the Queen Elizabeth Class (QEC) aircraft carrier was described from the perspective of a collaborative research programme undertaken by industry (BAE) and academia (The University of Liverpool) to develop high-fidelity simulations of the carrier’s ‘airwake’. Although the flight deck of the QEC covers an area of four acres, the space available for an aircraft to manoeuvre is limited by other aircraft, personnel and equipment on deck. In rough seas the pilot will have to land on a pitching, rolling and heaving deck, and may have to contend with the presence of highly dynamic air flow over the flight deck. This ‘airwake’ is caused by the air flowing over and around the flight-deck edges and superstructure as a result of the combined effect of the prevailing wind and the forward motion of the ship.

Hybrid power plants returned to fore again in the session on real-time power control systems, with presentations on both the use of simulation and the application of machine learning to optimise their operation. Experts from L3 MAPPS, meanwhile, gave insights to the real-time platform management technology developed for the Royal Navy’s latest frigate, the T26 Global Combat Ship.

With immense verve and energy, John Polgaze tackled the prickly topic of environmental compliance challenges and their relevance to warship design. He hammered home the importance of asking why the rules are formulated as they are and understanding their deeper goal, rather than simply following the instructions on the can. The operational profile of warships is, he emphasised, seldom compatible with IMO regulations written for cargo ships. Nevertheless, mindful interpretation can inform ways to reduce their environmental impact.

The conference culminated in an awards ceremony for the Sir Donald Gosling Award, which showcased the work of young authors highlighting the exceptional talent amongst aspiring young engineers and innovators.

While limited space means it has only been possible to hint at the breadth and depth of topics covered during the event here, INEC undoubtedly lived up to its reputation for showcasing emerging technical advances and offering a platform to discuss new ideas and original thinking on perennial challenges. Full proceedings will made available online to IMarEST members in early 2019.