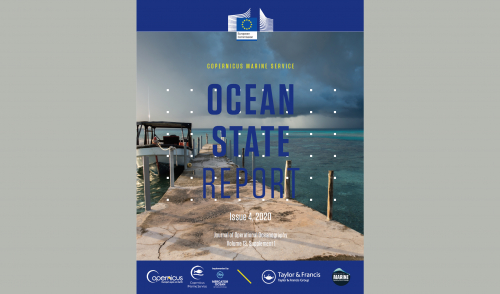 Now in its fourth edition, the Ocean State Report paints a detailed scientific picture of the state, variability and change in the marine environment based on the work of 140 scientific experts from 30 European institutions.

Accelerating sea-level rise, an unabating retreat in sea-ice, rising acidification and surface temperature are some of the more uncomfortable findings detailed in a comprehensive new report released as a supplement of the Journal of Operational Oceanography (JOO), one of the Institute of Marine Engineering, Science & Technology’s (IMarEST) peer-reviewed academic journals, published by Taylor & Francis Group.

Alongside the full scientific report, the Copernicus Marine Service has also published a summary that distils its key findings for policy makers, those working in the Blue Economy and the general public.

The ocean is undergoing sweeping, severe, and unavoidable changes, with major impacts on marine ecosystems and humanity. The report finds a warming and increasingly acidic ocean, with rising seas and retreating sea ice.

"Every year this pivotal piece of work provides us a yet more comprehensive and troubling picture of the changes taking place in the ocean, and sheds light on the potentially severe and unavoidable consequences if we fail to take action. The report again underlines the urgency of working together as a community to put the brakes on the climate emergency, and to adapt and build resilient communities – whilst supporting a sustainable blue economy." Dr Bev Mackenzie, Policy Director, IMarEST.

Written by more than 140 scientific experts from more than 30 European institutions, OSR4 includes nearly 30 updates, many of which will feed into models to help scientists better understand the forces that drive our climate.

For those involved in the blue economy it is a vital data set which draws on measurements from the EU’s satellite Earth Observation Programme, Copernicus to provide information that can be used for a wide range of industries, from fishing to wind energy.

Billions of people directly or indirectly depend on the ocean for their energy, food and livelihoods. This report helps those involved in the industries obtaining those resources to optimise operations and improve sustainability.

“The Ocean is a central component of the Earth climate system and human communities depend heavily upon the goods and services provided by the Ocean. “

Understanding and monitoring the ocean based on best available science is crucial to inform society, economic and environmental stakeholders – and to take action to protect the ocean.” Karina von Schuckmann, oceanographer and chair of the Copernicus Marine Ocean State Report.

One paper in this edition attempts to put a monetary value of the oceans as a carbon sink - natural capital that is absent from measures of national accounting such as the Gross Domestic Product (GDP). It presents measurements suggesting the value of carbon sink ecosystem service provided by the Mediterranean to be almost €2.1 billion in 2018.

The report also explores explore ocean surface transient winds and upwelling, partly a wind-driven mechanism, that produces fertile marine environments and can contribute to carbon sequestration through the biological carbon pump. It’s an important part of the global carbon cycle, which has implications for future climate assessments.