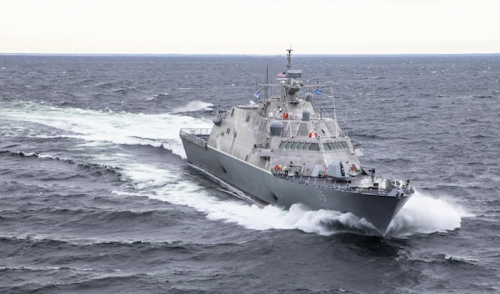 US Navy courtesy of Lockheed Martin

One the US Navy’s most advanced combat vessels has collided with a berthed freighter in Montreal, Quebec, leaving both ships damaged, but their crews uninjured.

The incident happened as the USS Billings was leaving its slip – shortly after two tugs assisting it had cast off their tow-lines.

The Freedom-class littoral combat ship then lost control and slid along the M/V Rosaire A. Desgagnés.

The 378ft warship sustained damage below its waterline and to its starboard bridge wing.

The extent of the damage to M/V Rosaire A. Desgagnés – a 452ft dry bulk vessel – is still unknown.

“We have begun an investigation to understand what happened and why,” said a US Navy spokesperson.

“We will incorporate lessons learned from the incident to ensure we conduct future operations safely and effectively.”

The US Navy took delivery of USS Billings in February this year.

It is due to be commissioned in August, in Key West, Florida.

Freedom-class littoral combat ships – which cost around ‎$360m each – have been plagued by problems.

Apart from mechanical failures, serious incidents encountered by the ships have included: lubricant contamination leading to complete loss of power, gearbox damage caused by insufficient lubricating oil, and seawater intrusion into a crankcase due to a failed seal that led to severe engine damage.

Observers point to the ship's reduced-manning operating concept, which leads to multi-role workloads and long hours for crews.

Meanwhile, the US Navy is still reeling from two serious collisions involving its warships in 2017.

In June 2017, the destroyer USS Fitzgerald collided with a merchant vessel off Yokosuka, Japan, on June 17, 2017 – resulting in the death of seven sailors.

Then, two months later, the destroyer USS John S. McCain hit a 600ft tanker off Singapore – resulting in the death of ten sailors.

Tweet
More in this category: « Wärtsilä fresh water system helps save 'one ton of fuel per day' Fixed boom redeployed in second attempt to clean up Pacific Ocean plastic »
back to top