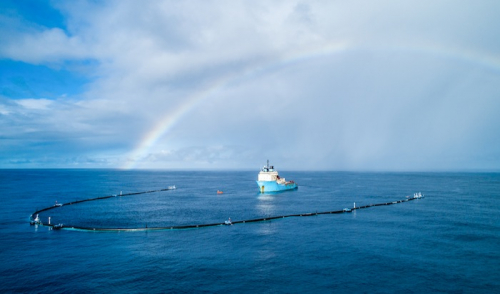 An ambitious floating device designed to collect and capture plastic waste from the ocean has been upgraded and redeployed in a second attempt to clean up the Great Pacific Garbage Patch.

Last September, the Dutch inventor and entrepreneur Boyan Slat and his marine engineering team at The Ocean Cleanup towed the 600m (2,000ft) floating boom – known as System 001 – to the heart of the so-called Great Pacific Garbage Patch (GPGP), in the first ever attempt to try and clean it up.

But, within four short months the team encountered what they euphemistically described as two “unscheduled learning opportunities”.

The first was the fact that the device wasn’t able to maintain a sufficient enough speed to prevent the captured plastic from escaping.

Secondly, due to the constant force of wind and waves, stress fractures began occurring in the boom’s connectors, which eventually led to it breaking apart.

“We don’t know with certainty if the new options will solve the issues – in fact, there may still be further unknowns which is, of course, always in the nature of doing something that has never been done before,” says Slat.

“What we do know is that every day we are not operational the ocean’s plastic pollution problem is getting worse and worse.”

Slat founded The Ocean Cleanup in 2013, at the age of 19, to develop technologies that would help rid the world's oceans of plastic pollution.

The project has now raised a reported US$31m in donations, and its eventual aim is to remove 90 per cent of the plastic waste from the world's oceans.

The boom supports a barrier with a tapered three metre (10ft) deep screen that traps pieces of floating plastic.

Fitted with solar-powered lights, cameras, sensors and satellite antennas, the boom is able communicate its position at all times, allowing a support vessel to retrieve the collected plastic from it every few months.

The upgraded design – now known as System 001/B – includes modifications to the boom’s structure and electronics package.

“The basic principle behind the iterative design process is to test, learn, and repeat until you have a proven concept,” says Slat.