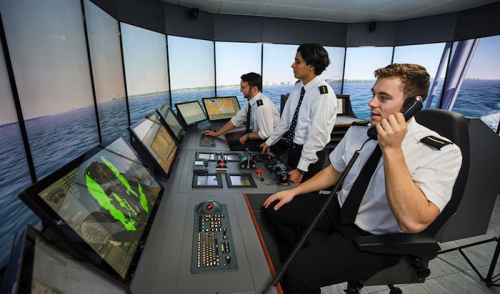 The largest and most sophisticated maritime simulation centre in the UK has been opened at Solent University’s main campus in Southampton.

The simulation centre will also feature hundreds of ship models, which will be used by cadets and maritime professionals alike.

“This is the beginning of the next chapter in the history of Southampton as an extraordinary maritime centre,” said UK Chamber president, Sir Michael Bibby, as he officially opened the new Maritime Simulation Centre.

The centre also features a ‘Virtual Shipyard’ to test ships which are in the process of being designed – or to create digital twins of existing ships.

This will allow officers to train in a virtual environment mirroring their own workplace.

The Virtual Shipyard will also be available for undergraduate and postgraduate degree students on the university’s yacht design and production courses.

The new centre will also play a pivotal role in the university’s maritime research – from Sea Traffic Management to the machine execution of COLREGS, and further studies looking at navigational safety and the human-machine interface and operations.

"Because simulators like this give cadets realistic training, it allows them to practice, again and again, in situations that cannot be replicated in any other learning environment,” said Sir Michael Bibby.

“In that sense not only is this facility attracting the deck and engine officers of the future, it is also providing an opportunity for existing seafarers to continue their training.

“And each one of them will become a better – and much safer – seafarer as a result.”