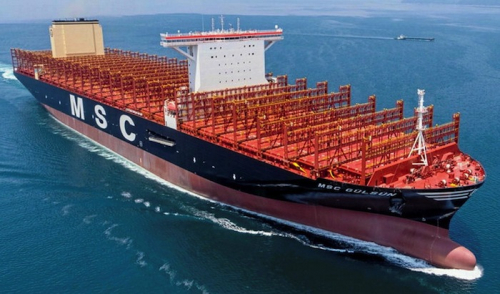 MSC Gulsun, the world’s largest container vessel by carrying capacity, set sail from north China’s port city of Tianjin this week, heading for northwestern Europe, according to a report in the China Daily newspaper.

The 400m vessel’s maiden voyage will see it travelling to Qingdao, Shanghai, Algeciras, Gdansk, Kaliningrad and Rotterdam, with a cargo of steel, furniture and chemicals.

Gulsun is also reported to feature Samsung Heavy’s latest technology – Svessel – a smart ship system that analyses navigation data to suggest the most appropriate sea route according to pricing and safety measures.

Samsung Heavy has said that the vessel is structurally designed so that it can easily adapt to become a liquefied natural gas (LNG) ship in the future.

The other five are under construction at Daewoo Shipbuilding and Marine Engineering, and are scheduled to be delivered by February next year.

“We will continuously secure the leading position in the mega containership market by vigorously targeting ultra-large containerships surpassing 20,000 TEU,” says Jonathan Zhu, managing director of Greater China for the MSC Mediterranean Shipping Company, the operator of the ship.