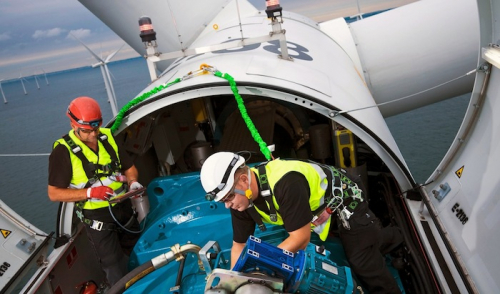 A new task force has been set up to help increase the diversity and skill sets of workers in the UK offshore wind industry.

The Investment in Talent Group – set up by the Offshore Wind Industry Council (OWIC) – includes representatives from leading offshore wind companies from the UK, Scottish and Welsh governments, as well as trade associations and academic institutions.

The launch of the new group is part of the UK’s Offshore Wind Sector Deal, which sets out a series of commitments to ensure offshore wind will be generating at least one-third of the UK’s electricity by 2030.

“We want the offshore wind industry to be the number one choice for STEM graduates, apprentices and workers from other industries looking for fresh opportunities,” says Celia Anderson who will lead the task force.

“This sector is investing long-term in skills, and championing a diverse and inclusive workforce.

“From people who work wonders in designing, building or maintaining world-leading projects, to people using digital skills to tackle new technological challenges – be they enthusiasts or skilled engineers – there really are great opportunities for everyone”.

The number of jobs in the offshore wind sector is predicted to treble to more than 27,000 by 2030.

The Investment in Talent Group will develop an offshore energy ‘passporting’ system to ensure that all parts of the energy sector recognise transferable skills and training, so offshore workers can move seamlessly between renewables and other technologies.

The Offshore Wind Sector Deal sets a target to double the proportion of women in the industry to one-third by 2030.

A target for black, Asian and minority ethnic (BAME) representation will be announced by the end of the year.

Tweet
More in this category: « Indonesia will not enforce IMO sulphur cap for its domestic fleet South Korea commits $35bn to develop its leading ports »
back to top