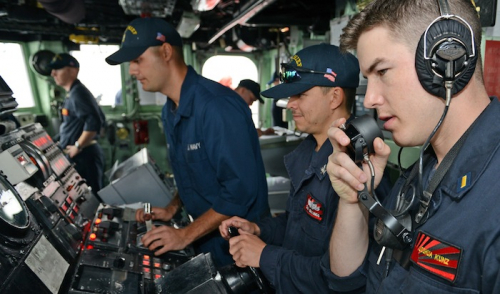 The US Navy says it will revert back to physical throttle and traditional helm control systems on its destroyers over the next 18 months.

An investigation into a fatal collision involving USS John S. McCain in August 2017 has revealed that the vessel’s touch screen system was overly complex and that the crew hadn’t been trained properly to use it – leading to a loss of control just before it crossed paths with a merchant ship in the Singapore Strait.

“As a result of innovation and a desire to incorporate new technology we got away from physical throttles – which are probably the number-one feedback from the point of view of the crew,” explains US Navy Rear Admiral Bill Galinis, who led the investigation.

“When we asked them about it, they said ‘just give us throttles that we can use".

USS John S. McCain was off the coast of Singapore when it hit a container ship, killing 10 of its crew.

USS Fitzgerald collided with a container ship near the Japanese mainland in an accident that killed seven sailors.

The incidents led to senior officers being charged with ‘negligent homicide’, while others were dismissed from the service.

Investigations have found that both incidents were preventable and the result of ‘multiple failures’.

Strongly implicated in the collisions were the touch screen controls introduced on the destroyers.

Control systems on different ships had little in common, so that sailors were often not sure where key indicators, such as a ship's heading, could be found on the screens.

The investigation revealed a strong desire amongst crew for wheels and throttles that, prior to the introduction of touch screens, were commonplace across many different types of vessel.

The US Navy is now developing physical throttle and wheel systems that can replace the touch screens.

It plans to start the process of replacing touch screens in the summer of 2020.

Tweet
More in this category: « Scandlines to install Norsepower Rotor Sail on hybrid ferry HFO and scrubbers best option for CO2 reduction: Report »
back to top