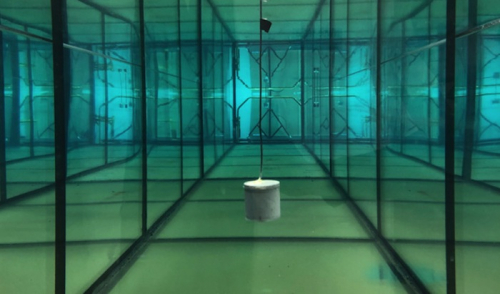 The team says the new system could be used to track marine animals over long periods, monitor sea temperatures changes, and even sample water from seas and oceans on distant planets.

The system makes use of two key phenomena – piezoelectric effect and backscatter.

Backscatter is a communication technique that transmits data by reflecting modulated wireless signals off a tag and back to a reader.

In the new system, a transmitter sends acoustic waves through water towards a piezoelectric sensor that has stored data. When the wave hits the sensor, the material vibrates and stores the resulting electrical charge. The sensor then uses the stored energy to reflect a wave back to a receiver — or it doesn’t reflect one at all.

“Basically, it means we can communicate with underwater sensors based solely on the incoming sound signals whose energy we are harvesting,” explains Fadel Adib, as assistant professor at MIT, who helped lead the research.

Inspiration for the system came to Adib while he was watching the BBC TV documentary Blue Planet.

“It occurred to me how little we know of the ocean and how marine animals evolve and procreate.

“Internet-of-things (IoT) devices could aid that research, but underwater you can’t use Wi-Fi or Bluetooth – and you don’t want to put batteries all over the ocean, because that raises issues with pollution.

“When you’re tracking a marine animal, for instance, you want to track it over a long range and want to keep the sensor on them for a long period of time. You don’t want to worry about the battery running out.

“Or, if you want to track temperature gradients in the ocean, you can get information from sensors covering a number of different places.”

The work is being sponsored, in part, by the U.S Office of Naval Research.