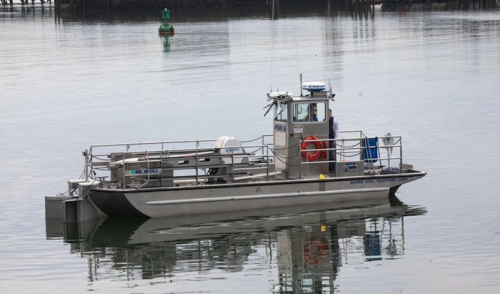 Boston-based company Sea Machines has successfully demonstrated autonomous systems in action on board the world’s first autonomous spill response vessel before a large audience of American marine and naval experts and representatives.

From a shoreside location, a Sea Machines operator commanded the skimmer boat to perform the following capabilities:

In unmanned autonomous mode, the skimmer will allow operators to respond to spill events around the clock, depending on recovery conditions, even when crews are restricted.

“This is the future of the maritime industry – it’s safer, it’s faster, and it’s more cost-effective,” said Richard Balzano of the U.S. Department of Transportation Maritime Administration (MARAD).

“This technology is here and it will make you a believer in autonomous marine operations.

“It will help the maritime industry evolve, support the environment, and reduce on-water risks.”

In August 2018, Sea Machines demonstrated the capabilities of its systems aboard the world’s first autonomous-command, remote-controlled fireboat, owned by TUCO Marine, in Denmark.