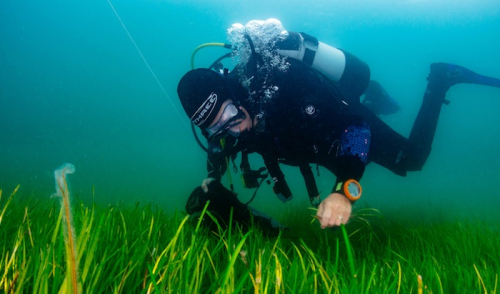 Swansea University has teamed up with Sky Ocean Rescue and the conservation organisation WWF, to launch the biggest undersea meadow restoration project ever undertaken in the UK.

The Seagrass Ocean Rescue project aims to restore 20,000 m2 of the marine meadow off the Welsh coast, which has been devastated over the past century by pollution, coastal development, and damage from boat propellers and chain moorings.

Seagrass is a flowering marine plant that is able to capture carbon from the atmosphere 35 times faster than tropical rainforests – making it a key weapon in the battle against climate change. It often grows in large underwater meadows, which absorb carbon dioxide and release oxygen.

“Seagrass is a wonder plant that doesn’t get the recognition it deserves,” explains Alec Taylor, WWF head of marine policy.

“Without seagrass the myriad of amazing species that depend on it will completely disappear, the food we eat will be affected, and the amount of carbon in the environment will increase.”

Globally, seagrass accounts for 10% of annual ocean carbon storage – yet occupies just 0.2% of the seafloor

It is important for biodiversity, acting as a nursery for a wide variety of marine life from endangered seahorses to colourful sea snails.

Seagrass is also a crucial habitat for many of the fish we eat such as cod, plaice and pollock

It helps protect coasts from erosion by absorbing wave energy, produces oxygen, and helps clean the ocean by absorbing polluting nutrients produced on land by humans.

This summer, one million seeds were collected from existing meadows around the British Isles by a group of volunteers.

The seagrass, which is found in shallow, sheltered areas along the coast, was reached by snorkelling, diving and wading.

Tweet
More in this category: « IMO helping maritime into the development mainstream US offered tanker captain millions of dollars to hand over ship »
back to top