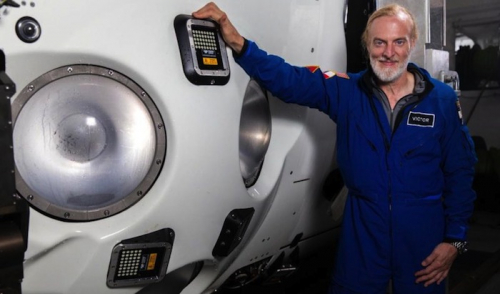 Undersea explorer Victor Vescovo has become the first human to dive to the bottom of the deepest point of all five of the world's oceans.

It was the first manned dive to ever reach the bottom of the Molloy Trench and marked the completion of the fifth and final stage of the Five Deeps Expedition – a mission to reach the deepest point of all five of the Earth’s oceans in a manned submersible and diving them solo.

Vescovo went by himself to complete the first manned dive to the bottom of the Molloy Deep – reaching a bottom depth of 5,550 metres.

The Five Deeps Expedition is being filmed by Atlantic Productions for a five-part Discovery Channel documentary series, Deep Planet.

“I am so proud of our extraordinary team,” said Vescovo after the dive.

“It took us over four years to achieve something no government or organization has ever attempted, to build this amazing diving system – and then actually do it.

“I still can’t quite believe I had the great privilege of getting to pilot the sub down to all these places where no human has gone before.

“Who says there is nothing left to explore on this planet? There is plenty to explore, and learn – in the oceans.“

The four previous depths reached on previous expeditions by Vescovo are:

Puerto Rico Trench – December 2018
The first solo dive ever to the bottom of the deepest point of the Atlantic Ocean – with Vescovo reaching a depth of 8,376m at the Bronson Deep.

South Sandwich Trench – February 2019
Vescovo became the first human ever to reach the deepest point of the Southern Ocean – reaching a depth of 7,434m. This was the deepest dive ever into a sub-zero Hadal zone (greater than 6,000 meters) and only the third ever solo dive below 7,000m.

Java Trench – April 2019
Vescovo reached a depth of 7,192m to become the first person to reach the deepest point of the Indian Ocean. At the bottom of the trench, footage was captured of a new species of hadal snailfish amongst many other bottom dwelling organisms.

Mariana Trench – May 2019
Deepest dive in history to the bottom of Challenger Deep, to a record-breaking depth of 10,924m, breaking a record held since 1960 by Lieutenant Don Walsh and Jacques Piccard. It also surpassed James Cameron’s previous solo dive of 10,908m in 2012. Three new species of marine animal were found during this dive, including a type of Amphipod, discovered at the bottom of Challenger Deep.

Scientifically, the expedition made over 100 deep-sea lander deployments in thirteen locations, discovered more than 40 new species, recorded over 500 hours of high-definition video from the deep oceans, collected over 400,000 biological samples, 1.5 million meters of water data, and collected bottom water at every deep for subsequent analysis.

Over the course of the entire Five Deeps Expedition from December 2018 through September 2019, the  team travelled more than 46,000 miles, discovered over 30 new nameable underwater features, and mapped over 300,000 square kilometres of seafloor (an area the size of Italy) using a Kongsberg EM124 multibeam system.

Tweet
More in this category: « Chinese shipbuilding giant to use air lubrication technology Mysterious disappearance of Baltic seabed monitoring station »
back to top