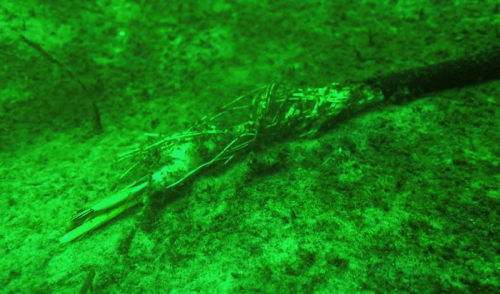 A “priceless” environmental monitoring station has vanished mysteriously from the seabed off Germany’s Baltic coast, sparking a police investigation.

The large underwater observatory – worth £270,000 and the size of a family car – was being used to measure seawater temperatures and levels of salinity, methane, oxygen and chlorophyll.

The Helmholtz Centre for Ocean Research (Geomar), a government-funded institute in Kiel, says that the station and another smaller unit – weighing a total of 770kg (1,700lbs) – appear to have been removed “with great force” from a restricted water area one mile off the coast of northern Germany, close to the Danish border.

Scientists stopped receiving data from the observatory on the night of 21 August – thinking initially that it was a simple transmission error.

However, when Geomar divers reached the site of the monitoring station this week they found only a “completely shredded land connection cable”.

Because of the weight of the machines, Geomar says it has ruled out storms, currents or marine animals as possible culprits.

“It was central to our research into environmental changes in the Baltic Sea – so it is essential that we get it back and up and running as soon as possible.”

Some of the station’s sensors had been used to maintain a continuous record of key ocean variables since 1957.

Police have begun an investigation into the disappearance and have appealed to the public to let them know of any wreckage that might turn up on shore.

Possible explanations include sub-aqua scrap metal thieves, Russian submarine activity, or boats fishing illegally that might have accidentally hooked the facility and dragged it away.