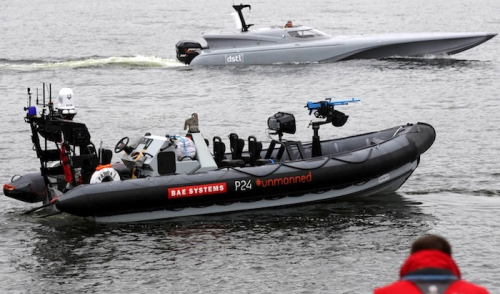 The Royal Navy's Type 23 frigate HMS Argyll used its combat system to work with an unmanned autonomous support RIB (rigid inflatable boat) in a series of trials that took place this week at London’s Docklands.

Developed by BAE Systems, the autonomous RIB is part-funded by NavyX – the Royal Navy’s Autonomous Hardware Accelerator funded by the UK’s Defence Transformation Fund, which was announced by the MOD (Ministry of Defence) earlier this year.

The Royal Navy says the autonomous RIB’s integration with an active warship illustrates its potential for future missions – including anti-piracy operations, and border control and enforcement.

During the trials, technologists from BAE and the Royal Navy, along with Defence and Science Technology Laboratory (Dstl) and autonomous systems suppliers L3Harris, demonstrated how the autonomous version of a PAC 24 boat could make naval missions more sustainable, more effective and safer.

“This is much more than an autonomous surface vessel demonstration for the Royal Navy,” explained Commander Sean Trevethan, programme director for NavyX.

“What we are doing is the first step of exploiting system architecture in a complex warship to integrate an unmanned system into the ship.

“This ensures the system and its payload fully contribute to the war-fighting capability of the ship.

“Ultimately this will change the way we fight, through integrated command and control, and lead to the development of new tactics, techniques and procedures.

“The PAC 24 RIB is well-known to the Royal Navy and has a lot of potential in terms of its payload and deployment as an unmanned system.

At 7.8m long, the PAC 24 RIB has a speed of 38 knots and can be either remotely controlled or used in an autonomous mode.

“The system’s integration with a Royal Navy warship represents our first glance at what the future of our maritime defence capability might look like,” said Mike Woods, chief technologist at BAE Systems’ Maritime Services.

“This technology represents a huge step forward in the interaction between human and machine – combining sophisticated autonomous technology with human capabilities to overcome many of the challenges faced in difficult conditions at sea.”

The Royal Navy says it has a total of six projects underway that are exploring autonomous technologies and platforms.

“We are in an era of rapid technological change, which we need to embrace, match, and utilise.”