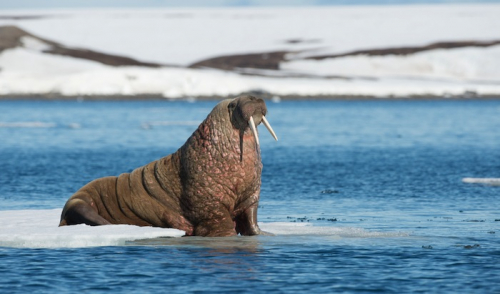 A Russian naval craft has been attacked and sunk by a walrus during a scientific expedition in the Arctic.

Sailors and scientists from the Northern Fleet were taking part in a joint mission with the Russian Geographical Society in Franz Josef Land, an archipelago 900km south of the North Pole in the Arctic Ocean, which is controlled by Russia.

As the group were attempting to land at Cape Heller in an inflatable boat, they were attacked by the female walrus.

“The walruses probably feared for their cubs and attacked the landing craft,” the Northern Fleet Press Service said later in a statement.

“The boat sank, but a tragedy was avoided thanks to the prompt action of the squad leader, and all of the landing participants were able to reach the shore safely.

The expedition is attempting to retrace the steps of polar explorers from over a century ago who first tried to map out the desolate, freezing archipelago.

Most of Franz Josef Land lies beneath glaciers and from October to February it experiences a 128-day-long polar night with temperatures plunging as low as -40 degrees centigrade.

The Russian Geographical Society says “continuous northern winds” have driven more ice onto the shores of the archipelago, and that numerous icebergs are now appearing in the narrow straits between the islands, making navigation increasingly difficult.

The Russian naval support vessel, Altai, from which the inflatable boat attacked by the walrus departed, remains in the Arctic and the scientists and sailors are said to be continuing with their expedition.