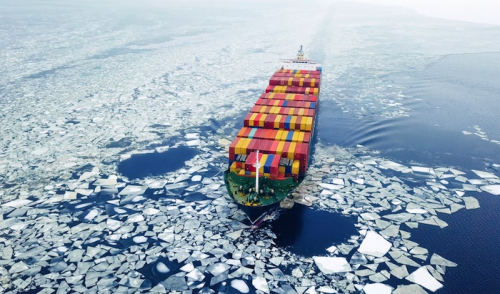 Hapag-Lloyd and CMA CGM have both announced that they will not use the Northern Sea Route due to environmental concerns.

The Northern Sea Route (NSR) – which connects Asia and Europe via the Arctic – is becoming increasingly viable in commercial terms for shipping as its ice fields continue to melt and retreat due to climate change.

“The use of the Northern Sea Route would represent a significant danger to its unique natural ecosystems due to the numerous threats posed by accidents, oil pollution or collisions with marine wildlife,” says Rodolphe Saadé, CEO of the CMA CGM, the world’s third largest container line.

“To avoid posing a greater threat to this fragile environment, CMA CGM will not use the Northern Sea Route

“We have made this choice to meet the needs of our employees and customers who are increasingly concerned about the environment.

"This is a brave, bold choice, which goes far beyond purely business decisions, and I invite the entire industry – competitors, partners and customers – to join us.”

“The particles produced by the combustion of carbon-based fossils and fuels contribute to global warming, which can harm our ecosystems,” says Jörg Erdmann, senior director of Sustainability at Hapag-Lloyd.

“As long as there are no guarantees that the Northwest Passage and Northeast Passage can be navigated without negatively impacting the environment, using them is out of the question for Hapag-Lloyd, as well.”

Tweet
More in this category: « Maersk and BIMCO back Japan proposal to limit propulsion power Stena Bulk to use methanol-fuelled tankers in joint venture »
back to top