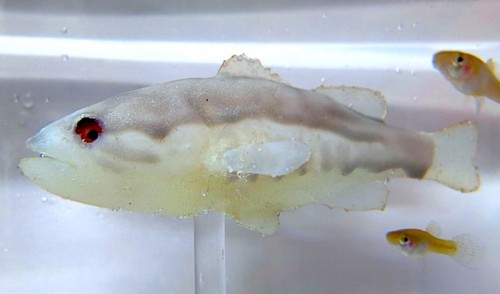 A team of researchers from New York University’s Tandon School of Engineering and the University of Western Australia are using robotic fish to chase off invasive fish species.

To prevent invasive fish species from reproducing and overwhelming waterways, the team developed a replica of a robotic largemouth bass to stress invasive mosquitofish and rob them of the opportunity to breed.

Mosquitofish are responsible for decimating native fish and amphibian populations in freshwater lakes and rivers around the world.

Led by NYU Tandon School of Engineering professor Maurizio Porfiri, the teams introduced the biomimetic robotic largemouth bass – a primary predator of mosquitofish – to groups of mosquitofish in the lab for 15-minute sessions once a week for six consecutive weeks.

During those sessions, the robotic fish displayed a range of behaviours – including aggression.

The mosquitofish were anaesthetized once a week so that the team could measure the weight and length of the fish.

The researchers noted that the mosquitofish with greater exposure to the aggressive robotic fish weighed less, suggesting that their energy reserves were depleted, and thus less likely to devote energy to reproduction.

Going forward, the team believes it needs to take the testing into the wild, but considers the method potentially more effective than current methods for controlling invasive species, such as introducing toxicants or trapping the species, which tend to fail or harm local wildlife.

The paper – Behavioural and Life-History Responses of Mosquitofish to Biologically Inspired and Interactive Robotic Predators – appears in the Journal of the Royal Society Interface.

Tweet
More in this category: « Stena Bulk to use methanol-fuelled tankers in joint venture Wave energy device 'could be used to power subsea equipment' »
back to top